With Innovation and Creative Use of Technology, Founding Father’s Dream of Prosperous Africa is Now Achievable

With the advance in digital technology and the progress attained by innovators in the continent, the dream of Africa’s founding fathers of building a continental economic powerhouse and prosperous continent is now attainable, according to Vice President Yemi Osinbajo, SAN.

Prof. Osinbajo stated this Wednesday evening in Abuja at the 10th-anniversary dinner of AfriLabs – a network organisation supporting Innovation Centers across African countries since 2011.

Speaking about how technology and innovation hubs are now able to bring the vision to fruition, the VP said “our advantages are obvious, we are the youngest continent on the planet, the vast majority of our population are digital natives, born in the digital revolution.”

His words: “barely 60 years ago, the first leaders of independent African states dreamt of a united and prosperous Africa. They spoke of one continent, one people, a people capable of becoming a political and economic powerhouse. As it turned out, that objective is yet to be attained.

“But today that dream of Africans working in collaboration to create an economic powerhouse is achievable and at hand.  The key lies in a planned digital future, innovation, and the creative use of technology for enterprise and development.”

Continuing, Prof. Osinbajo explained that “despite developmental constraints, Africa is still on course to disrupt the fourth industrial revolution itself with the sheer numbers of youthful talent and energy available. This has been proven with the disruption we continue to see across various sectors.”

On the progress made in the technology and innovation space, the VP noted that “in 2015, African start-ups struggled to raise about $200million, but in 2021 we have more than 6 Unicorns. In FinTech alone, we have Flutterwave, Paystack, Opay, and Interswitch, all valued at more than $1billion each.

“In e-commerce, we have Jumia, Ashraf Sabry’s Fawbry, an Egyptian e-payment company that allows customers to settle bills online and digitally, and is now on the Egyptian stock exchange with about 30 million customers.

“MNT-Halan, Egypt’s largest lender to the unbanked has about 1 million monthly active users and has disbursed $1.7billon in loans to date. Tala, a start-up in Kenya that helps the traditionally underbanked borrow, save, and grow their money has expanded to India, the Philippines, and Mexico and has disbursed close to $3billion of credit, and has more than 6million customers.

“And here in Nigeria, we have Piggyvest, a wealth management platform that at the end of 2019, had helped about one million users save about $80million. And in Senegal, Wave, a  mobile money provider that became Francophone Africa’s first unicorn when it received a $200million injection of funds,” he added.

Prof Osinbajo then noted that “while Africa’s FinTech unicorns are payments-focused today, in the future we can expect more variety; digital lenders and insurers. Invest-tech and blockchain are also likely to feature.

“Of course, we should also expect unicorns to emerge in other sectors—companies that will help to address the continent’s key challenges in relation to healthcare, schooling, trade, and so on.”

The VP however called on stakeholders, especially governments across the continent to support the revolution taking place in the sector, noting that ‘‘much of the growth of African startups has been organic. Mostly operating as individual enterprises or at best as city initiatives. National effort is still usually missing.”

Said the VP: “there is now a need for positive action, proactive and intentional policies by governments to create the environment for startups and technology-based enterprises to thrive.”

Highlighting some efforts of the Buhari administration to support the technology startups, he disclosed that “one of the first actions that we took in 2015 as an administration was to work with development partners to conduct an innovation mapping exercise across Nigeria.

“We did this by engaging the ecosystem across the country, including AfriLabs at the time, and this process led to the report titled “Catalyzing Growth in Nigeria through Innovation”.”

“Armed with the results of this exercise, we supported more than 12 private sector-led innovation hubs across the country through our social investments programme.

In the area of policy, the VP explained that “we also established the Technology and Creativity Advisory Group as part of our Industrial Policy and Competitiveness Advisory Council.

“Some of the policy initiatives developed from the advisory group include the wide range of licenses issued by the CBN for FinTechs, the collaboration with the African Development Bank to raise $500million to support technology and creative start-ups, venture capital and investments.”

Prof. Osinbajo also cited the hosting of the Aso Villa Demo Day in 2016 with Mark Zuckerberg in attendance, as a major activity in the sector that set the pace for subsequent engagements in the tech ecosystem.

In addition, the VP observed that “we have also made considerable progress in the enactment of the Nigerian Start-Up Act, an effort of stakeholders in the private sector, Federal Government agencies, state governments, and the National Assembly to institute legislative protection for founders and investors in start-ups.”

According to Prof. Osinbajo, he shared those policy actions “not because it is a perfect story, but more to show what is possible and what can be improved on.”

While calling on governments and the private sector across the continent to work together in addressing some of the challenges, Prof. Osinbajo stressed the need to train more, and develop more useful digital skills on scale.

The highpoint of the event was the presentation of awards to startups across Africa, comprising winners from Nigeria, Ghana, Algeria, and Cameroon. Other countries on the continent including Kenya and Senegal were also represented at the event.


Those in attendance at the dinner were the Minister of State for Industry, Trade and Investment, Amb. Mariam Katagum; Mr. Tomi Davis, an Angel Investor; Board Chair of AfriLabs, Rebecca Enonchong, Board Director of AfriLabs, Moetaz Helmy, including female comedian, Chigurl who was the Mistress of Ceremonies.


Laolu Akande
Senior Special Assistant to the President on Media & Publicity
Office of the Vice President
28th of October, 2021 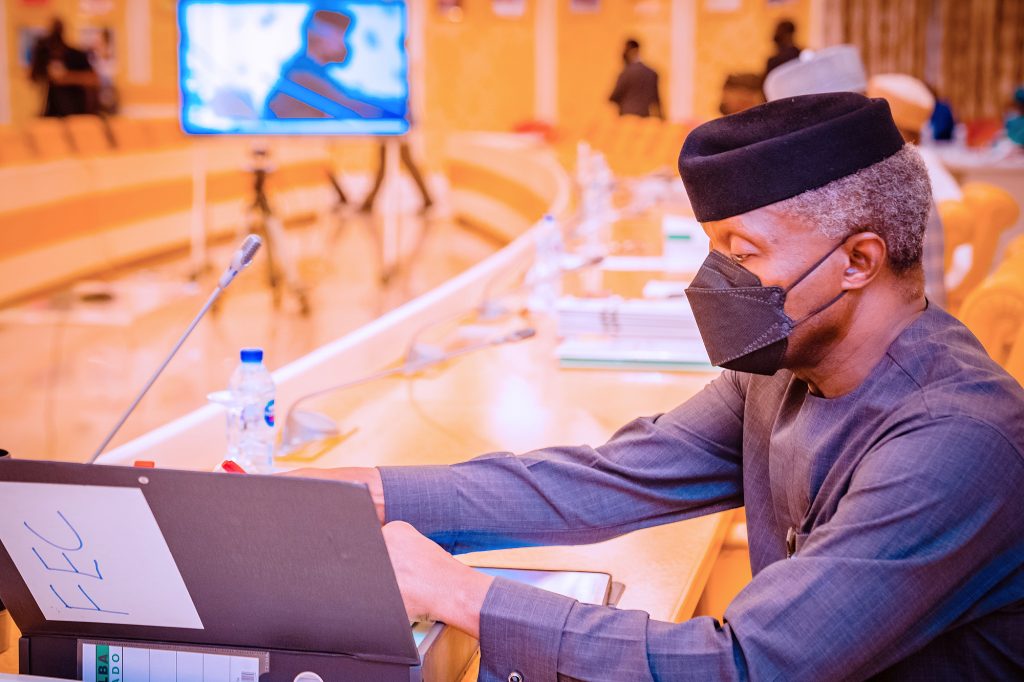