President Muhammadu Buhari on Tuesday directed the Minister of Finance, Budget and National Planning to look for special funding for the second runway of the Nnamdi Azikiwe International Airport, Abuja.

Speaking at the inauguration of the new Terminal Building, Murtala Muhammed International Airport, Lagos, the President also directed the Minister of the Federal Capital Territory to conclude the documentation of the approved 12,000 hectares of land to accommodate the runway and other developmental projects.

Further, the President tasked the Minister of Aviation to fast-track the airport concession programme, to boost aviation practice in the country and make the aviation industry reflect global standards.

The President noted that the completion and delivery of five brand new international airport terminals since 2015, which were at 11% completion level then, aligns perfectly with the Aviation Roadmap, developed in 2016, for the purposes of establishing critical infrastructure, including a National Carrier as well as maintenance, repairs and overhaul centre, and improved Airports Terminals through concession.

The President, who described the administration’s investments in inter-state rail connectivity, road networks, agriculture, power and telecommunications, despite limitations in resources, as unprecedented noted that robust initiatives have been complemented with specific fiscal policies to drive aviation infrastructure renaissance.

‘‘These include the designation of 4 airports, namely Lagos, Abuja, Kano and Port Harcourt as Free Trade Zones, in which customs duty is not applicable; removal of VAT on all forms of shared transportation, including air transportation; and exemption of commercial aircraft and spare parts from VAT payment.

‘‘The one in Kano has also been completed, and will be commissioned soon, while work continues apace to complete that of Enugu shortly,’’ he said.

The President expressed confidence that the new terminal in Lagos with sixty-six check-in-counters, sixteen Immigration desks at arrival, twenty-eight Immigration desks at departure, and eight security screening points, among others, would  go a long way in contributing to the socio-political and economic prosperity of the country,

He added that the improvement would increase airport operations and management services to about 14 million passengers per annum, create 3,000 direct and indirect jobs, increase inflow of Foreign Direct Investments (FDI) and exponential growth in the Gross Domestic Product (GDP).

He thanked the Government and People of the People’s Republic of China, through the China Export-Import Bank and CCECC Nigeria Limited, (FAAN), for their commitment and support towards the completion of the project.

The President also commended the Federal Ministry of Aviation and its agencies, particularly, the Federal Airports Authority of Nigeria, for working assiduously towards the realization of the project.

‘‘With the delivery of this project, a new era of safety, security, and comfort has been ushered into the Nigerian aviation industry, and I am persuaded that it will get better with the passage of time,’’ he said.

The Governor of Lagos State Babajide Sanwo-Olu said it was instructive that Lagos State in one day had witnessed the evolution of three major infrastructure development projects that will change the Nigerian landscape while commending President Buhari for the infrastructural renewal and redevelopment necessary for a city like Lagos.

He lauded the private sector in the aviation industry for their continued contributions to the growth of the country despite the challenges.

The Governor informed the gathering that Lagos State Government was forming a partnership with FAAN towards ensuring that the new international terminal enjoys easy access which would be achieved by creating a bypass, the Airport – Alimosho Bypass Project, to create an alternative route to the airport.

The signing of the agreement for the partnership was later done by the officials of the Lagos State Government and FAAN.

In his remarks, Minister of Aviation, Senator Hadi Sirika said aviation is the worldwide rapid transportation network that facilitates international trade, commerce and tourism, the only medium for achieving continental integration and interaction towards achieving the AU Agenda 2063.

He commended the administration of President Buhari for efforts towards resolving the problems inherited in the aviation industry in 2015 such as lack of professionalism, scarcity of foreign exchange, obsolete equipment, poor facilities, blocked funds for airlines among others, adding that more still needed to be done.

The Minister said the airport concession project including the new terminals has reached an advanced stage with the Ministry issuing requests for shortlisted firms before the end of March.

According to the Minister, a study by the International Air Transport Association (IATA) on Nigeria in 2020, “showed that the sector created 241,000 jobs, direct and indirect, and contributed $1.7billion to the economy,” with a hope to grow the contribution of the sector from the current 0.68% to 5% or approximately $14.16billion.

Senator Sirika gave assurances that the new terminal will be linked to the railway system. 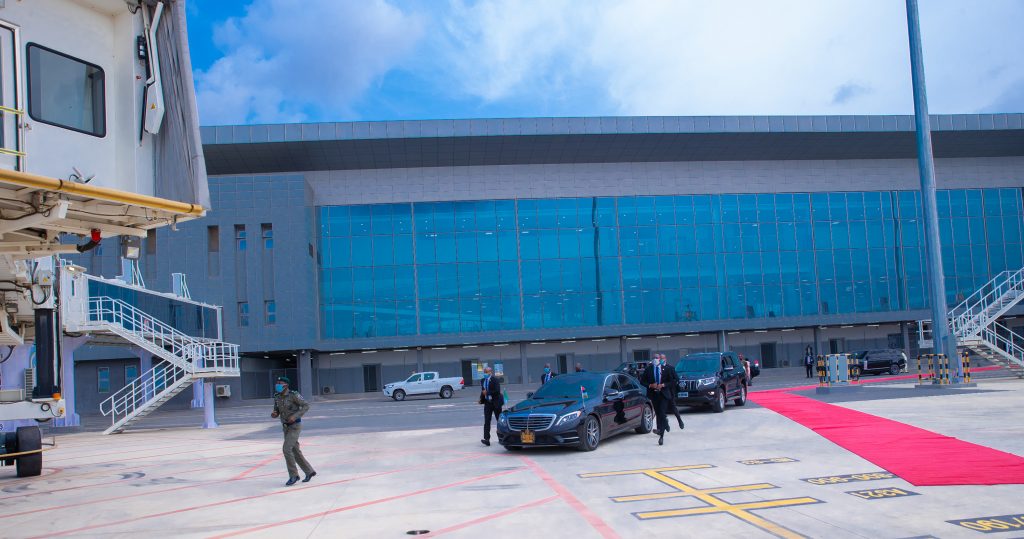 Next Post President Buhari's Address at the Commissioning of the New International Terminal of Murtala Muhammed Airport, Lagos