*We insist UN, EU, others support impositions of sanctions, says Osinbajo in Accra

An ECOWAS Extraordinary Summit of the Authority of Heads of State and Government held yesterday in Accra, Ghana to review the political situations in Guinea and Mali, has decided to maintain the sanctions imposed on Guinea and impose similar ones against the Mali Transitional Government.

The Communique at the end of the 3rd Extraordinary Summit on Guinea and Mali attended by Vice President Yemi Osinbajo, SAN on behalf of the President, stated that “the Authority decides to uphold the suspension of the Republic of Guinea from all ECOWAS governing bodies as well as the travel ban and freeze on financial assets imposed on the members of the CNRD and their family members until constitutional order is restored,” in the country.

Similarly, regarding Mali, the ECOWAS leaders at a meeting presided over by President Nana Addo Dankwa Akufo-Addo of Ghana and Chair of the ECOWAS Authority resolved that in “conformity with the decision taken on 16th September 2021, the Authority decides to impose sanctions with immediate effect against individuals and groups who have been identified, including the entire transition authorities and the other transition institutions.

“These sanctions will also be imposed on the members of their families. The sanctions include a travel ban and a freeze on their financial assets. It further instructs the President of the Commission to consider and propose additional sanctions at its next Ordinary Session on 12th December 2021, should the situation persist.”

The ECOWAS Summit attended by leaders from 13 countries then called “on the African Union, the United Nations, and the bilateral and other multilateral partners to endorse and support the implementation of these sanctions.”

Speaking to the media at the end of the Summit, Prof. Osinbajo noted that African countries have gone far beyond military coup as a means of changing political actors and that coups are unacceptable.

He added that ECOWAS Heads of State and Government will continue to prevail on the military juntas in Guinea and Mali to return their countries to democratic rule.

According to the VP, “one of the important points that the ECOWAS Heads of State and Government make is that coups and coups de’tat generally are just completely unacceptable….and that we cannot continue to have a situation where they are tolerated for the simple reason that in Africa, West Africa in particular, we’ve gone way beyond military coups as an answer to the question of change in political actors.”

Continuing, Prof. Osinbajo said, “there is a very strong feeling amongst the Heads of State that we must insist, that other international bodies: the UN, EU, and other regional groups must support the impositions of sanctions on individuals and groups that choose not to follow the democratic process of change of government and choose to go by way of coup de‘tat.”

Referring to the situations in Guinea and Mali, the Vice President said “it appears from all indications that much progress has been made in Guinea, although we are still concerned that there ought to be much more clarity on transition.

“But Mali is a much more difficult situation, there is much concern because very little progress had been made.”

President of Ghana and Chair of ECOWAS Authority of Heads of State and Government, Nana Addo Dankwa Akufo-Addo, had earlier briefed the meeting on the outcome of a high-powered delegation led by himself to Guinea and Mali on the 17th of September and the 17th of October respectively, as part of the resolutions of the previous Summit held on the 16th of September this year.

They decided as follows:

A. On the political transition in the Republic of Guinea

– The Authority reaffirms its demand for the unconditional release of President Alpha Condé.

It urges the Transition Authorities to urgently submit a detailed timetable of activities to be carried out under the transition towards the holding of elections, in accordance with the decisions of the Extraordinary Summit of ECOWAS Heads of State and Government held on 16th September 2021.

– The Authority decides to appoint H.E. Dr Mohamed Ibn Chambas as Special Envoy to Guinea with a view to strengthening dialogue with the Transitional authorities towards a successful and short transition process.

B. On the political transition in the Republic of Mali

– The Authority remains concerned about the deterioration of the security situation in Mali, as a result of the heightened political uncertainties in the country. It calls on the Transition Authorities to intensify their efforts to improve the security situation, especially by ensuring effective state presence in the affected areas.

In this context, the Authority calls on the neighbouring countries to step up security presence along their borders with Mali and instructs the ECOWAS Commission to deepen the ongoing discussions with the African Union Commission with a view to enhancing the security situation in the Sahel.

– Furthermore, the Authority calls for a more robust and offensive mandate and enhance the operational capacity of MINUSMA to deal with terrorism challenges in Mali. ECOWAS will accordingly request the United Nations Security Council to make the necessary amendments to the mandate of MINUSMA.

– On the political front, the Chair of ECOWAS informed the Authority of the official notification by the transition authorities of their inability to meet the transition deadline of February 2022.

The Authority highly deplores the lack of progress made in the preparations for the elections, including the absence of a detailed timetable of activities for the conduct of elections on the agreed dates.

– The Authority reiterates the need to adhere to the transition timetable in respect of the elections scheduled for 27th February 2022 and calls on the Transition Authorities to act accordingly to ensure an expeditious return to constitutional order.

Accordingly, the Authority calls on the International Community to take the necessary measures to ensure that the transition authorities respect their commitment to an expeditious return to constitutional order.

– The Authority condemns the expulsion of the ECOWAS Permanent Representative to Mali in this critical context and calls on the transition authorities to uphold the spirit of dialogue and collaboration with the ECOWAS Commission to ensure a successful transition.

– The situation in Mali and Guinea will be reviewed at the Ordinary Summit of the ECOWAS Heads of State and Government on the 12th of December 2021.

The Authority reaffirms its adherence to all the ECOWAS normative frameworks, particularly the ECOWAS Supplementary Protocol on Democracy and Good Governance.

Besides the President of Ghana and Nigeria’s VP, the Summit was attended by 4 other Presidents from Ivory Coast, Senegal, Niger and Guinea-Bissau, 1 other VP from Benin Republic, the Prime Minister of Burkina Faso, 3 Foreign Affairs Ministers from Gambia, Liberia and Togo, and 2 Ambassadors from Sierra Leone and Cape Verde.

The Vice President was accompanied to the Extraordinary Summit by the Minister of State for Foreign Affairs, Ambassador Zubairu Dada, Nigeria’s High Commissioner to Ghana, Vice Admiral Ibok Ete Ekwe Ibas (Rtd) and the Special Adviser to the President on Economic Matters, Dr Adeyemi Dipeolu. 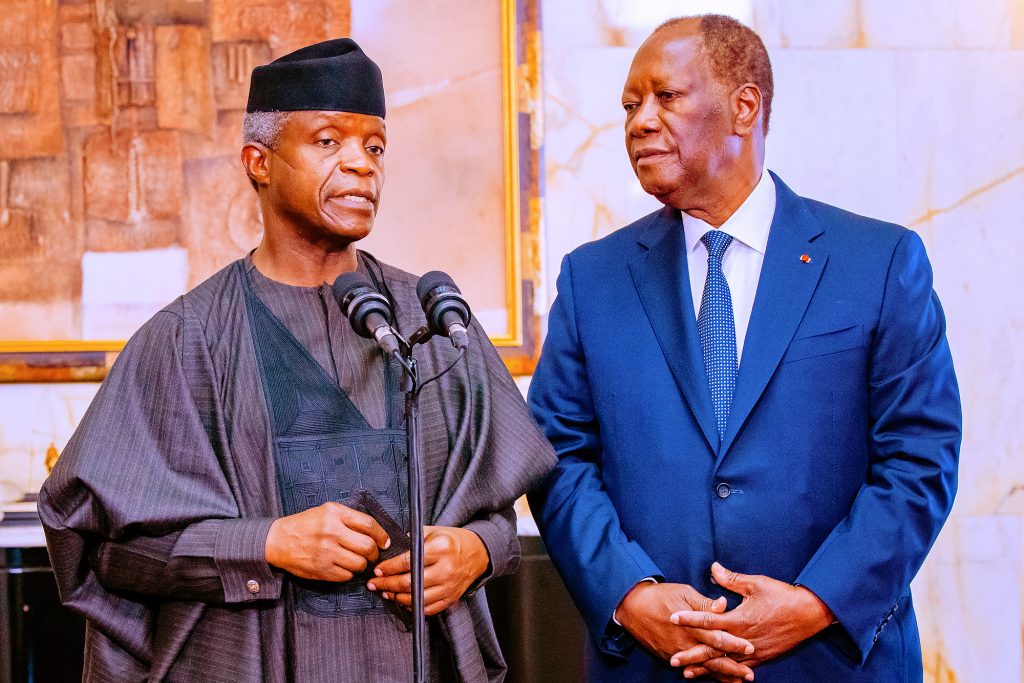