In line with its objective of creating a more conducive business environment in Nigeria, the Federal Government will continue to deepen business reforms and partner with the private sector to ensure wholesome national development.

Vice President Yemi Osinbajo, SAN, stated this today at the commissioning of the state-of-the-art Toyota Service and Research Facility in Lagos State.

“It is important to restate that the Federal Government has committed itself to partner with the private sector, recognizing that the private sector is better equipped and resourced to lead the development of the economy,” Prof. Osinbajo stated.

The newly commissioned world-class facility is said to be among the first of its kind in West Africa with varied capacity for research, training and skilling.

Restating that this public-private synergy was the crux of the  National Development Plan 2021-2025, the Vice President also noted the Buhari Administration remains committed to the reforms being driven by the Presidential Enabling Business Environment Council (PEBEC).

“The President has by several directives, approvals and executive orders set in motion and in many cases with the private sector, the most aggressive drive yet for appropriate infrastructure, power, roads, rail, and broadband connectivity. This includes ensuring that our ports work smoothly for trade purposes, building new port complexes and dredging of existing but disused ports, ensuring that government regulators facilitate rather than hinder business operations.

“It is this imperative of aggressively supporting private sector stakeholders that resulted in the 7th iteration of the Presidential Enabling Business Environment Council’s (PEBEC) 60-day National Action Plan (NAP 7.0), which commenced on the 7th of February and will go on till the 7th of April, 2022. NAP 7.0 aims to deepen the reforms delivered over the past 5 years with a focus on exports, process automation, improvement in regulatory practices, judicial reforms and Executive Order 01/ReportGov.NG compliance.”

On the National Development Plan 2021-2025, the VP said it is a collaboration between the government and the private sector, with an investment commitment of N348trillion.

“The private sector is expected to invest N298trillion or about 86% of the projected investments.  This simply means that government must create the most conducive environment for private enterprise in Nigeria. This I am sure you have heard several times, but I must say that this is now absolutely existential for our economy,” he stated.

The Vice President also noted the ongoing development efforts of the Administration in different areas across the country.

“We have highlighted key action items in all of the focus areas to ensure that they do not unravel and to ensure that we drive sustainability. Yes, we have reported considerable improvements in the six years since our ease of doing business reforms began, but at the same time, there remains a lot of work to be done. We believe that diligent implementation of these reforms will encourage game-changing private investments such as this state-of-the-art service centre,” he noted.

He also highlighted other government interventions in this area, such as the Investing in Digital and Creative Enterprises programme(i-Dice), an over $600million facility by the AfDB launched by the President recently and the Nigeria Jubilee Fellows Programme (NJFP).

The VP added that while the i-Dice programme “will support young tech and creative sector entrepreneurs through the provision of finance, skills development and infrastructure,” under the NJFP, “20,000 graduates, after their youth service, will be given fully-paid internships that will last for 12 months in reputable private and public sector organizations across the country.”

He further said that the Jubilee Fellows programme, which will last for five years and is funded by the Federal Government, the UNDP and the EU, will help participants “gain relevant career and life skills that will enable them to transition seamlessly into professional, business or public sector careers, while also earning a living along the way.”

Speaking about the Toyota Certified Service Centre, the Vice President added that the Centre is more than just about providing quality after-sales service, to being “developed as a teaching, research and resource centre, to provide dealers with world-class, practical hands-on training.”

He added that the facility “has been built to standards comparable to the most sophisticated around the world, with the latest best-in-class equipment and modern technology designed to deliver superior, world-class services to vehicle owners in Nigeria.  I think Toyota Nigeria deserves commendation for its focus on capacity development in the automotive industry.”

Highlighting the significance of the Toyota Service in harnessing technical and engineering skills, Prof. Osinbajo was of the view that reducing the skill gap in the populace will further boost the nation’s industrialization efforts.

“One of the chief problems in our industrialization effort is the skills gap, especially middle cadre technical and engineering skills. So, an intentional and aggressive public and private sector synergy in developing this type of capacity is crucial. Our work with the private sector at the Nigerian Industrial Policy and Competitiveness Advisory Council underscored and honed this approach,” he said.

While thanking the Managing Director, Toyota Nigeria Limited, Mr. Kunle Ade-Ojo, as well as its board and management, for the landmark event, the Vice President also observed that Toyota became “by far Nigeria’s favourite car’ because of the foresight, commitment to high values and focused investments of Chief Michael Ade-Ojo, founder and CEO of Elizade Motors, the majority investor in Toyota Nigeria Limited.

“Chief Ade-Ojo has demonstrated that it is possible to be honest and principled and still be an outstanding local and international business success. All that alongside his outstanding commitments to philanthropy and provision of high-quality higher education, over the years.   Congratulations sir. We pray that you will live much longer not just to see the continued success of your children and your businesses, but to see the Nigeria of your dreams,” the VP said.

As the VP’s convoy drove out of the facility in Isolo heading back to the airport en route Abuja, his convoy was met by a throng of artisans and other categories of Lagosians who had amassed on the road hailing and cheering the Vice President. On seeing the massive crowd, the VP then came out briefly waving in return to the thunderous applause of the largely young people many of whom had their stations and work around the Isolo-Oshodi axis. 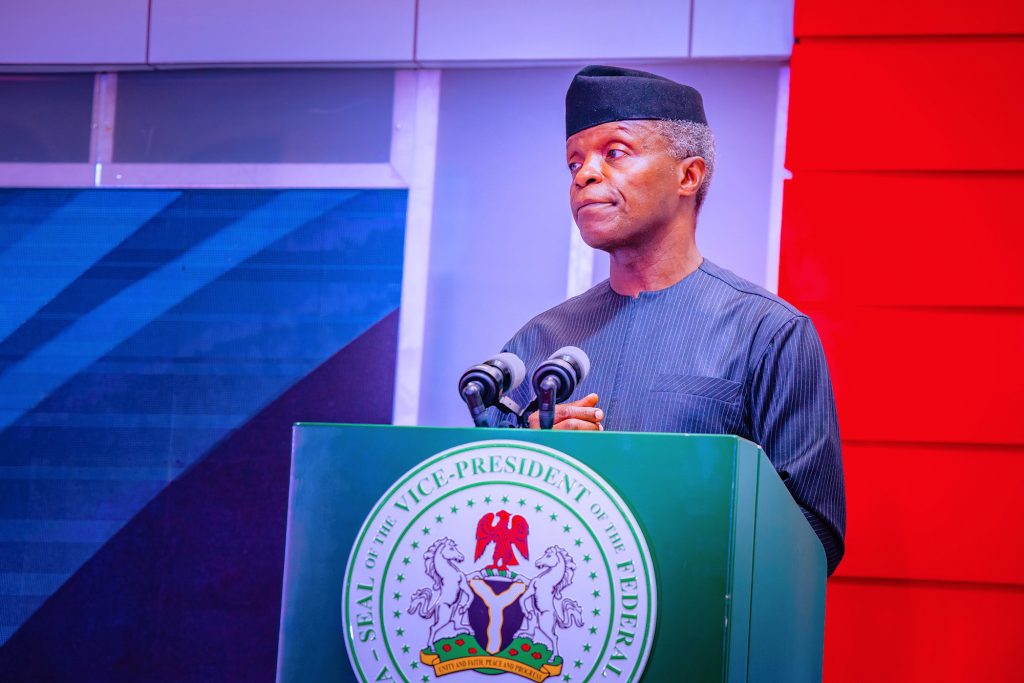