How Buhari Administration’s Sustainability Plan Would Revive Economy, By Osinbajo

Despite the challenges posed by the COVID-19 pandemic globally, the Buhari administration will not relent in its efforts towards improving the country’s healthcare infrastructure and economy, while creating more jobs for millions of Nigerians in different sectors, supporting small businesses, local production and manufacturing, as well as extending the social safety net for the most vulnerable in society, according to Vice President Yemi Osinbajo, SAN.

Prof. Osinbajo stated this on Friday during his participation as a guest panelist in the Emmanuel Chapel’s “Economic Sustainability Beyond COVID-19” webinar.

The President had earlier at the wake of the global pandemic late March directed the VP to chair the Committee to develop a clear and overall Economic Sustainability Plan in response to challenges posed by the COVID-19 pandemic.

Speaking on the Buhari administration’s efforts to cushion the effects of the pandemic on Nigerians, the Vice President stated that improving healthcare infrastructure remains a major objective of the administration.

With the introduction of the Basic Health Care Provision Fund, which is one per cent of the Consolidated Revenue Fund, the Vice President noted that perhaps for the first time, the kind of provision made for healthcare has increased significantly, especially in the period of a global pandemic.

He said, “Out of the N500bn initial stimulus fund that is factored into the current budget, N126bn of it is going into healthcare.

“We’ve all noted how states have risen up to the challenge of the COVID-19 pandemic and how resuscitated healthcare facilities, new isolation centres, new ICUs are coming up. The number of testing centres has also increased. We are hopeful that we’ll be able to sustain that momentum.”

It would be recalled that the 2020 health budget recorded the highest budgetary allocation to the health sector over the last five years. In 2018, N356bn was allocated to healthcare out of the total budget of N9.1tn. In 2019, the figure was N372bn out of the total expenditure of N8.91tn. This is a 13.3% increase of N372bn that was budgeted in 2019.

The Vice President noted that one of the ways the administration is supporting small businesses is by reducing Company Income Tax.

“In our case, our Tax-to-GDP has been extremely low, VAT in particular. Nigeria’s 7.5% VAT rate is probably the lowest when compared with some other African countries. For example, Kenya has about 16%, South Africa is about 15%, Algeria has 19%. Besides, at the moment, domestic revenue mobilization is an issue.

“A major source of revenue for government is tax. But you must also take account of the fact that we’ve also reduced Company Income Taxes generally, especially for small businesses, which are the engines of growth for the country. So, there is a conscious effort to ensure that we don’t tax businesses out of business.”

On the issue of improving the power sector, the VP stated that one of the proposals of the Economic Sustainability Plan was the adoption of renewable energy, especially solar, and working with the private sector to install mini grids and solar home systems across the country.

He said, “We’ve done quite a bit of that already. We have in places like Sabon Gari, Ariaria markets: a private sector deployed solar systems that is paid for by stall owners in those markets. We’ve done micro grid in Sokoto state. Interestingly, this is entirely private sector driven and the consumers are prepared to pay for service. You find that they pay even higher than the tariffs people pay for grid power.

“A private sector-driven solar power system, such as the one we are planning as part of the Economic Sustainability plan, is one that we think would work and stands a good chance of providing power to about 25 million (individual) Nigerian homes, places and homes where there has been no power previously.”

On the Federal government’s plan to tackle unemployment, the VP stated that one of the proposals by the Economic Sustainability Committee, is to build 300,000 homes across the country within 12-months’ time frame, which he noted would provide more jobs for Nigerians.

Prof. Osinbajo added that small and medium scale local businesses and young professionals within the construction industry would benefit immensely from the policy.

Explaining, the VP said, “this is also an opportunity for us to develop the local industry, especially the construction industry. That is exactly the plan in developing the housing programme, because we thought it would generate the jobs that are required now, aside from the fact that we have a housing deficit.”

He added, “The second point is that we intend to use local materials, locally produced, as much as is possible in construction. It is also a fantastic opportunity for the private sector to bring in equipment and set up factories that could be used to manufacture some of these things. It would be a massive game changer if we are able to deliver it in the way that we planned.”

Prof. Osinbajo noted that some of the reforms the administration is putting in place to improve the economy include massively improving local production, while reducing the country’s dependency on imports.

According to him, “this would be more crucial in the coming years and it is entirely possible. We preserve the value of our Naira if we are able to do more locally, and we have the capacity to do this. For example, we are now doing more in terms of local production of rice, and there is more value to the farmer, with increase in local production.”

The Vice President further emphasized that the Buhari administration will expand its Social Investment Programmes (SIPs) to benefit more Nigerians. “We think this pandemic is also an opportunity for some kind of an enhanced welfare programme for Nigerians, so that they can at least live very decent lives,” he said.

He added, “One of the critical things that we suggested in the Economic Sustainability Plan is increasing or widening the safety net, the SIPs; and in many cases, we are increasing by almost a 100 per cent.

To further tackle the issue of unemployment among young Nigerians, the VP stated that the administration intends to increase the number of those that are being directly engaged through the N-Power scheme, which has so far engaged over 500,000 young Nigerians.

Besides, the VP noted that the “President recently asked that another million households of the extremely poor should benefit from the SIPs Conditional Cash Transfer, of which we are already doing about a million beneficiaries, which means they would get about N5,000 every month, which we are doing at the moment.

“We’ve done several microcredit loans through the Tradermoni, Farmermoni and Marketmoni schemes. And we are thinking of increasing microcredits to petty traders, artisans, farmers etc.; we are looking at doing almost four million new microcredit loans.

Speaking further, VP Osinbajo stated that the Economic Sustainability Plan also proposes to engage more Nigerians through farming, which he said could generate direct and indirect jobs for millions of Nigerians.

“Our Economic Sustainability proposal is that we are trying to bring in 20,000 and 100,000 hectares of land per State for agricultural use, and we are looking at how to work with the states to deliver that, which means we are going to bring in far more farmers into the net and this would mean more jobs for people in the rural areas. The same for the mass housing scheme. There are major opportunities here.”

The webinar which was moderated by Prof. Konyin Ajayi, SAN, and Dr. Chinny Ogunro, featured other panelists including, Board Chairperson of the Global Alliance for Vaccines and Immunization (GAVI), Dr. Ngozi Okonjo-Iweala; former president of the African Development Bank, Mr. Donald Kaberuka; and the immediate past Emir of Kano, Muhammadu Sanusi.

Laolu Akande
Senior Special Assistant to the President on Media and Publicity
Office of the Vice President
20th June, 2020 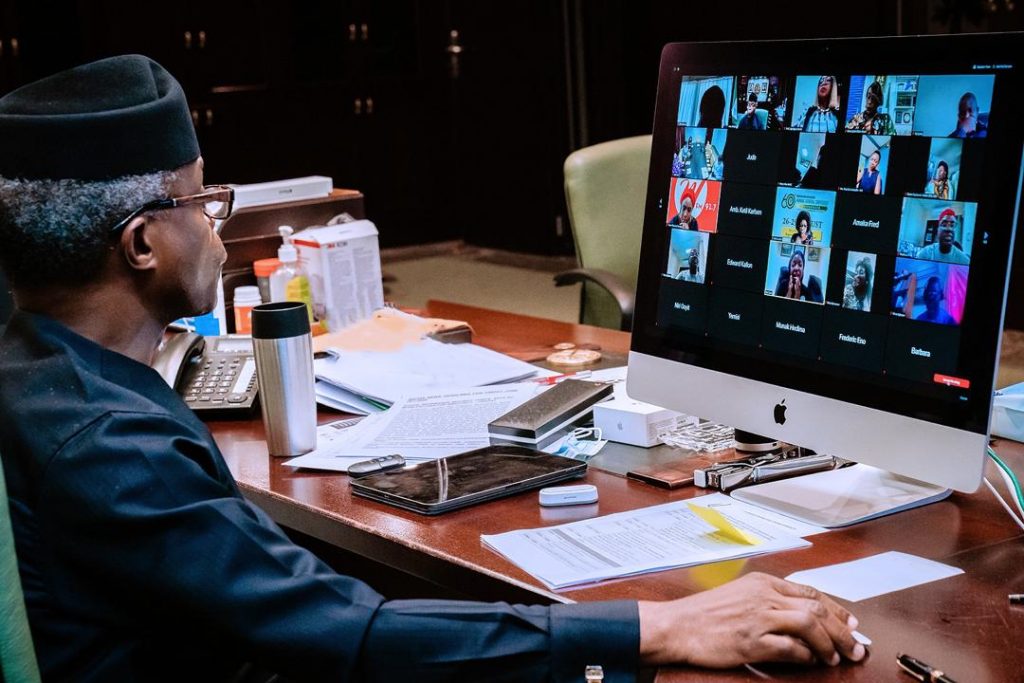 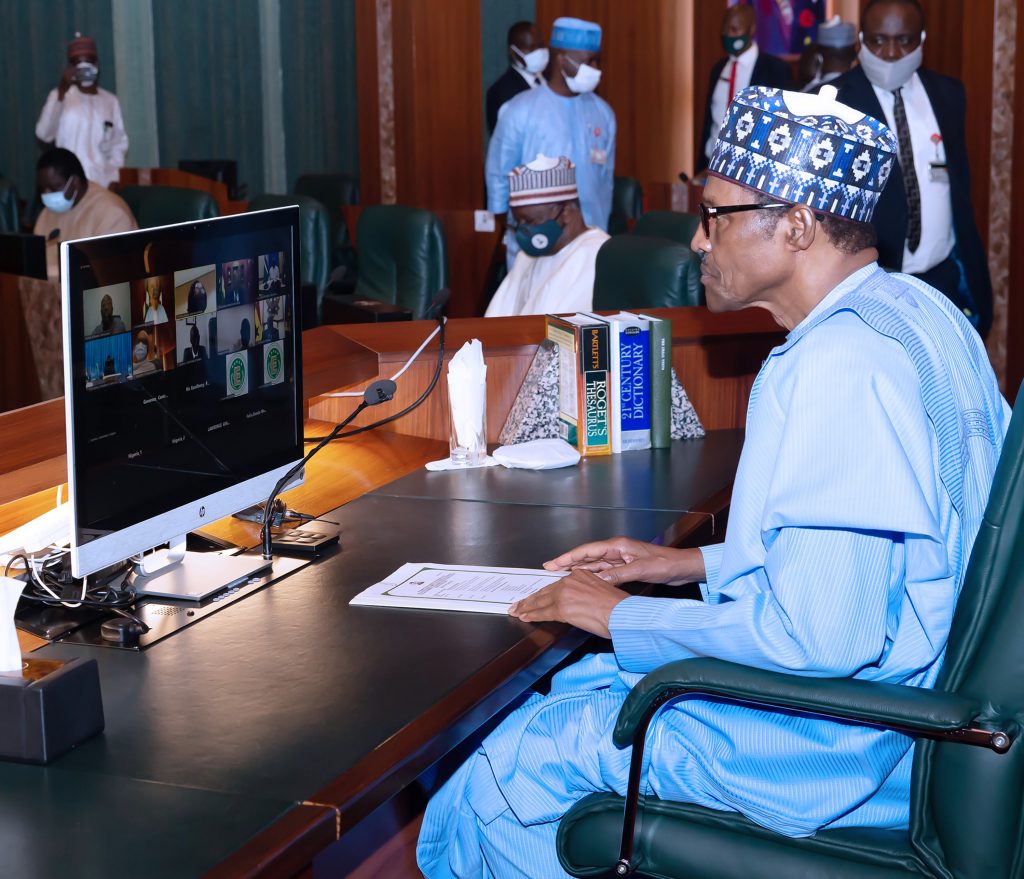