How to Guarantee the Africa We Want, By Osinbajo

For Africa to achieve the desired level of attainment, issues such as poverty, socio-economic rights, environmental and sustainable development alongside concerns about democracy and unconstitutional changes of governments, have to be dealt with.

This was the charge Vice President Yemi Osinbajo, SAN, gave as Special Guest of Honour today in his address at the opening of the 2022 Judicial Year of the African Court on Human and Peoples’ Rights, in Arusha, Tanzania. He spoke on the theme: “The African Court and The Africa we want”.

“The Africa we want is one that addresses, amongst others, humanity’s most pressing concerns of eradication of poverty, hunger and disease; the sustenance of democracy and the rule of law; sustainable development, especially dealing with challenges of climate change and application of finite resources for economic growth and diversification; human security and peace,”  Prof. Osinbajo declared.

For instance, he mentioned that the Court has required States to uphold rights and principles of fairness, transparency and inclusiveness in elections during the COVID-19 pandemic, while also noting its declaration that States should not use the postponement of elections to “unduly” prolong elected officials’ term of office.

The VP, who addressed the justices of the African Court, other sister regional human rights institutions, groups of lawyers and experts, and international human rights bodies, among other stakeholders, identified the challenges and burdens “we must discharge to arrive at the type of continent we want,” and then asked the question, “what is the Court doing by its mandate and practice to relieve those burdens?”

He then called on African nations to, while pursuing implementation of Agenda 2063, resolve to improve the human rights records of the continent in the immediate future, as “the purpose of life is in the here and now, not in the far future.”

He was optimistic that “Africa will overcome its current governance and human rights challenges,” but decried “the lack of a proper enforcement mechanism, either at the domestic or continental level, notwithstanding the Ouagadougou Protocol’s mandate on the AU Executive Council,” describing it as one of the challenges Africa must work hard to resolve.

Prof. Osinbajo then identified other challenges as “the reluctance of some States to respect the Court’s orders of interim measures, not to mention funding problems in the face of competing financial needs within the AU system.”

The Vice President proposed that “we must find some common grounds moving forward. There might be a need for further interaction between the court and member States and civil society on how to work through these issues. The general reluctance of States to concede sovereignty is not peculiar to African States. But it is possible for us to be more creative about complementarity for example.”

“I make these submissions recognizing very clearly going by the present constitutive documents of the courts and the AU Charter, we are not in a position to effect what I am proposing but I believe by way of amendments, we may be able to at least, experiment with some thinking out of the box on complementarity.

“But the point being made is that it should be possible to change tactics from time to time while keeping the strategy and vision constant,” he added.

At the event also attended by the Prime Minister of Tanzania, Mr Kassim Majaliwa Majaliwa who represented President Samia Suluhu Hassan, the President of the Court, Justice Imani Aboud, declared the 2022 Judicial Year opened, explaining the rationale for the first-ever formal opening of the yearly session of the Court, including the need to boost the visibility of the Court and engaging its stakeholders.

Also the Vice President of the Court, Justice Blaise Tchikaya, in the vote of thanks commended Prof. Osinbajo “for the constant support that he always gives to the Court.” 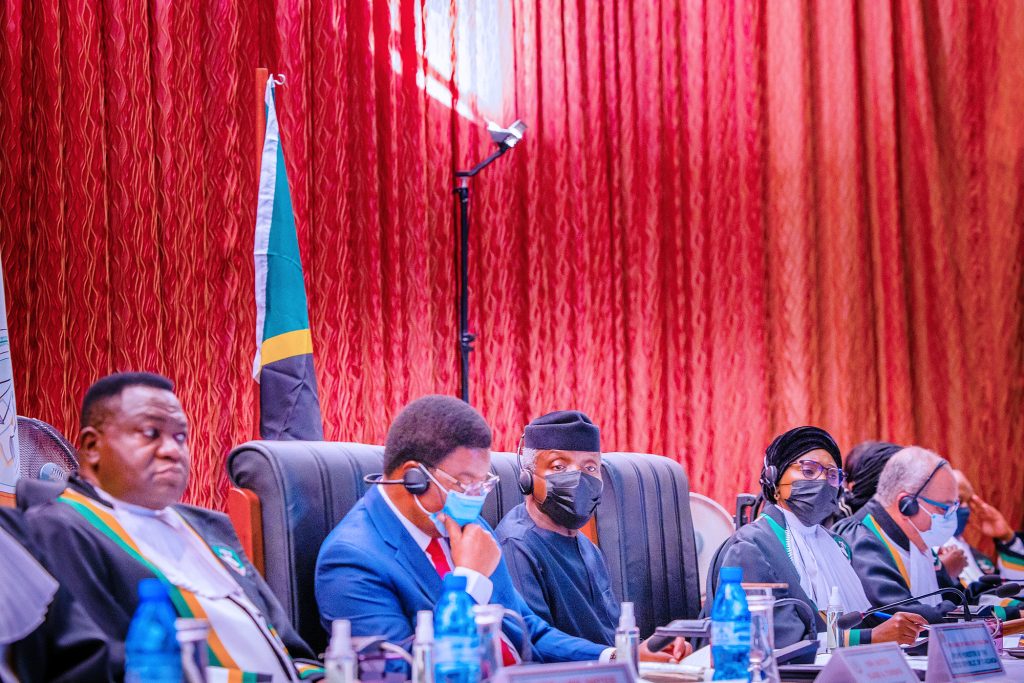 Next Post President Buhari Attends Session on UNEP@50 in Kenya