The various intervention programmes of the Buhari administration since 2015 to date are designed and implemented in order to improve the health, education and socio-economic conditions of the Nigerian people, especially women, children and youths, according to Vice President Yemi Osinbajo, SAN.

Prof. Osinbajo stated this Thursday in Abuja at an event to mark six years of the Future Assured programme, an initiative of the Aisha Buhari Foundation. Later same day, the Vice President also spoke at the public presentation of Senator Ken Nnamani’s book, Standing Strong.

According to the Vice President at the Future Assured event, “the very future of Nigeria and our communities depend on how well we address the many concerns of women and children in our communities, especially the focal areas of health, education and economic empowerment.

“We agree with Future Assured’s belief that all social indices can be influenced if the health, education and economic status of the population are improved upon. And that is the case, clearly, women constitute half our population and the youth are at least 60% of that population. Women especially, young girls, continue to face problems of every kind and this problem mutate as the social pressures increase every passing day.”

Continuing, he said, “since the COVID-19 pandemic and the lockdowns, it has been shown by empirical studies that the rates of dropouts, especially of girls, have increased, child marriages also increased, adolescent childbearing, and gender-based violence, all these indices increased.

“The sharp drop in income for most families here in Nigeria and in most economies of the world would mean that families will have to make choices that almost always will disfavour the girl-child and of course, female children have suffered disproportionate displacement and deprivation caused by the insurgency and conflict in the Northeast and Northwest.”

He then explained that “for the Federal Government, the President has prioritized the solutions to these issues. Since 2015, we have ensured that government’s social and entrepreneurial programmes have an affirmative component for women.”

“We implemented a payroll support programme which was designed to mitigate income losses in the wake of the Covid-19 pandemic, and of the 307,173 employees that have benefited, 130,880 or 43% of beneficiaries are female-owned businesses.

“Of 94,318 artisan beneficiaries of the programme, 40,386 are female artisans, i.e., over 41% of beneficiaries. And so far, 35% of all MSMEs grants are female. And all of these are deliberate affirmative action to ensure that women benefit proportionately.”

The Vice President further stated that “in 2020, the Federal Executive Council approved a World Bank credit facility in the sum of $500million to finance the Adolescent Girls Initiative for Learning and Empowerment Project, to improve secondary education opportunities among girls in targeted areas of participating States which are Borno, Ekiti, Kaduna, Kano, Katsina, Kebbi and Plateau.”

In addressing violence and other abuses against women, the VP said “in November 2019, in an effort to enhance access to justice, we secured a toll-free emergency number and shortcode for the FCT- SGBV Response Team, with the generous support of Airtel.

“We also developed Referral Guidelines for Gender-Based Violence Response in Nigeria and a National Guide for the Establishment of Sexual Assault Referral Centres in Nigeria, to further enhance coordination.”

“Also in 2019, the President directed the National Human Rights Commission to set up a special panel to investigate cases of unlawful arrests, assault and Sexual & Gender-Based Violence in the Federal Capital Territory following complaints of raids of night clubs and arrests of women by the Police,” the Vice President added.

Commending the Future Assured programme for the impact of its interventions across health, education and social welfare, Prof. Osinbajo said “it certainly has been an exciting 6 years”.

He listed some of the impactful projects executed by the initiative as “the educational initiatives, especially the Youth Education Empowerment Programme (YEEP) where large numbers of youths are given tutorial classes, in preparation for WAEC, NECO, NABTEB and JAMB; support to IDPs that return to their communities with relief materials including foodstuff, clothing, beddings, and building materials.

Other projects listed by the VP include “Building of Schools and Orphanages in Maiduguri; Distribution of Future Assured Packs to Patients in Abuja Hospitals, Free Health Screening Services in Kogi State in conjunction with Kogi Women and Youth Advancement Foundation; Women Empowerment and Training in Lagos State alongside Distribution of Maternity Kits also in Lagos, among others.”

Aside from the First Lady, Hajiya Aisha Buhari, other dignitaries present at the event include the wife of the Vice President, Mrs Dolapo Osinbajo; Governor Yahaya Bello of Kogi State; Minister of Health, Osagie Ehanire; his counterpart in the Niger Delta Affairs Ministry, Sen. Godswill Akpabio, and top United Nations officials, among others.

In another development, Prof. Osinbajo spoke at the public presentation of the book titled “Standing Strong: Legislative Reforms, Third Term and Other Issues of the 5th Senate,” a biography of Sen Ken Nnamani.

Extolling the leadership qualities of Sen Nnamani, Prof. Osinbajo said “the first thing you notice about Ken Nnamani, especially as you observe the characteristics of politics and politicians, is an act of lack of desperation to occupy political office.”

Directing his comments to the former President of the Senate, the VP said “it is clear that you want to serve, but not at all cost.”

Continuing, he observed that the “lack of desperation has greatly helped him in having the courage of his convictions. This is why even at the risk of losing his senate presidency at the time, he stood against the notorious third term agenda and he stood very strong.

According to the VP, “a nation such as ours must have men and women who are capable of standing strong.

“Sen. Nnamani, we are today faced with challenges that call for the same type of strong leadership that you showed many years ago as President of the Senate, especially on the question of national unity and the building of a just fair and equitable society.

“We know that we as a nation are better together than apart, and our collective future is worth fighting for. Therefore, this generation of leaders has a historic responsibility to handover an economically and socially strong, and united nation to the coming generation.” 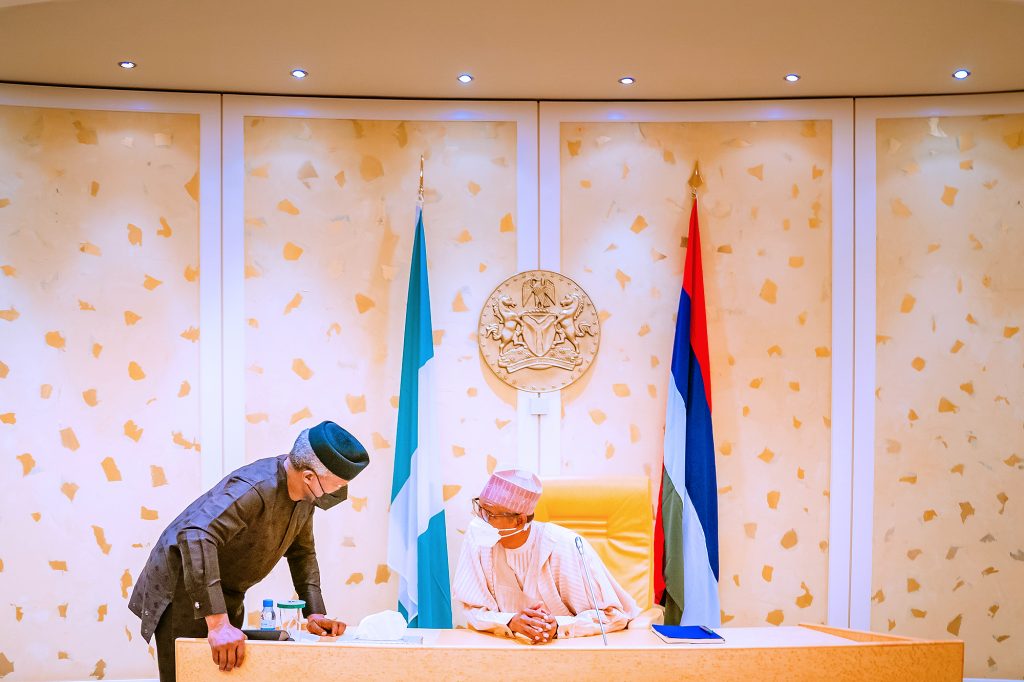