President Muhammadu Buhari Thursday pledged that Nigeria will continue to assist Guinea-Bissau in any way possible, saying ‘‘a peaceful and prosperous Guinea-Bissau is a win for West Africa and for Africa.’’

President Buhari joined the Heads of State and Government of Senegal, Mauritania and Burkina Faso to celebrate the 47th independence anniversary of Guinea Bissau at the 24 de Setembro National Stadium, Bissau.

Speaking at the event, President Buhari said he was proud of the support Nigeria provided to past electoral processes in the West African country’s commendable efforts to entrench democracy.

‘‘This support can only be increased under my tenure,’’ he said.

The President also placed on record Nigeria’s contribution of troops under the auspices of ECOWAS Mission in Guinea Bissau (ECOMIB), noting that they played an important role in maintaining peace and security.

Congratulating President Umaro Sissocco Embalo, the government and people of Guinea Bissau on the 47th Independence anniversary, the Nigerian leader said it was his sincere hope and prayer that Guinea-Bissau and its people will continue to grow in strength and prosperity.

He also expressed good wishes for greater achievements in the years ahead for the West African country.

‘‘I feel delighted because this is my first official visit to Guinea Bissau since my assumption of office in 2015 and because I am here to join you , brotherly people of Guinea Bissau, as you celebrate this great day with renewed hope and aspiration.

‘‘I am truly grateful for the warm reception accorded me and my delegation, since our arrival in this city.

‘‘As you mark your freedom as a nation “free forever’, let me seize this opportunity to salute all Bissau Guineans both at home as well as in the Diaspora, for the strides you have made as a country.  Permit me to say Parabens!  Congratulations!’’

President Buhari recounted that on September 10, 1974 Guinea Bissau declared its independence from Portugal, after a protracted struggle for freedom, which brought Portuguese colonization to an end.

‘‘It is fitting on this august occasion to remember your forebears and to celebrate them for the sacrifices they made for you to be free.

‘‘The highest tribute we can pay them is to build on the gains of independence.  It is my sincere prayer that your country will continue on the path of national cohesion, growth and unity,’’ he said.

On the return to democracy in the West African country, President Buhari noted that in the aftermath of the peaceful presidential elections in 2019, which ushered in the present administration of President Embalo, Guinea Bissau had a great opportunity to unleash the great economic potential of this country.

‘‘The international community attested to the fairness of the elections now endorsed by the Supreme Court of Guinea Bissau.

‘‘I, therefore, congratulate you, the people of Guinea-Bissau for this achievement and urge you to sustain your unity of purpose,’’ he said.

The Nigerian leader also used the occasion to reflect on the excellent relations between Nigeria and Guinea, pledging that his administration will take it to a new height.

‘‘Relations between Nigeria and the Republic of Guinea Bissau which dates back to the country’s liberation struggle against Portugal have been extremely warm.

‘‘I am determined to carry this excellent relationship to the next level of fruitful cooperation and partnership, together with my brother Umaro Embalo,’’ he said.

On regional integration, President Buhari stressed the need for ECOWAS member countries to remain committed to realising the vision of its founding fathers.

‘‘It is my desire that Nigeria and Guinea-Bissau as well as other member countries of the Economic Community of West African States (ECOWAS) will continue to provide the impetus in realizing the objectives and ideals of its Founding Fathers and to ensure security, peace and development of our region,’’ he said.

The President thanked President Embalo, the government and good people of the Republic of Guinea-Bissau for being a good host to Nigerians resident in the country, saying ‘‘colonial boundaries will never break the bond of kinship that binds us’’.

Later in the capital city of Bissau, President Buhari commissioned a road named in his honour. 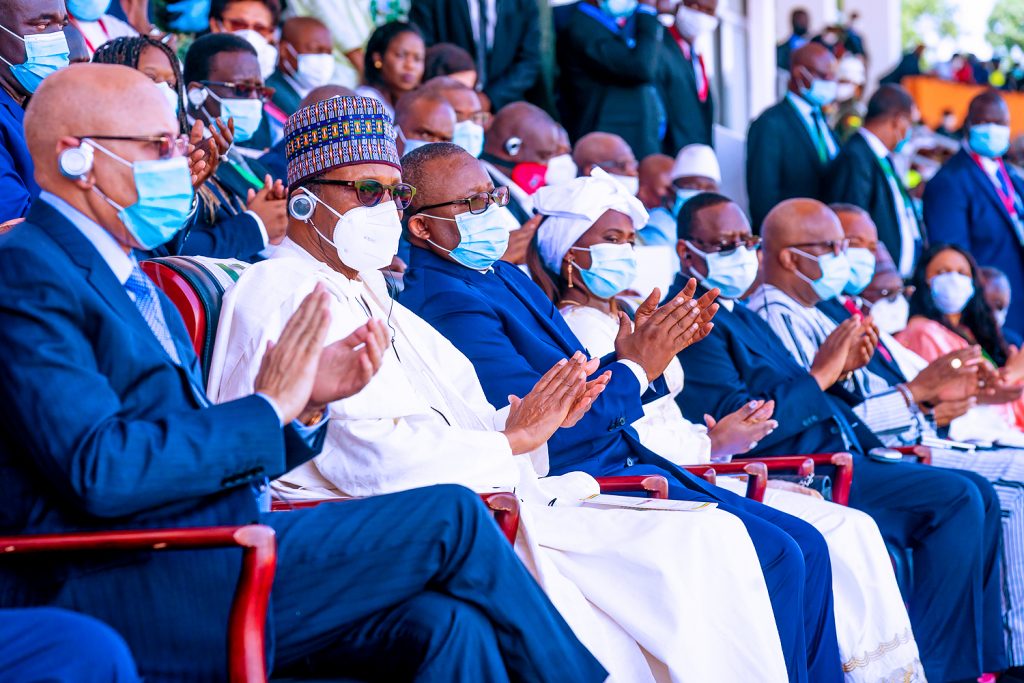