Security: We Must Not Forget How Far We’ve Come, We Will Be Tough Going Forward, Says President Buhari

President Muhammadu Buhari Wednesday in Abuja warned of tougher security measures in restive parts of the country, with review of operations and strategy, reassuring Nigerians that the efforts that resulted in relative peace in South-South, and rescuing of North-East from the hold of terrorists will be ramped up.

Speaking at a meeting of the National Executive Committee (NEC) of the All Progressives Congress (APC), the President noted that the major security challenges have remained in the North Central and North West, saying, “We are going to be very tough.’’

“I will like us to reflect on what the situation was before we came in. How many Local Government Areas were under the control of terrorists in the North-East?

“In the South-South, we all know what the situation was; now we have relative peace. With the resources at our disposal, we have done very well.

“People are very forgetful. Our main problem now is in the North West and North Central. People are killing one another in these places, what for? We are going to be very tough,’’ he said.

President Buhari urged party members to be more mindful of the pitfalls that led to the ouster of the Peoples Democratic Party (PDP) in 2015.

“The PDP thought that only time could remove them, and the time actually came. They thought it was impossible to lose elections,’’ he added.

President Buhari said the APC was formed by a merger of Action Congress of Nigeria (ACN), Congress for Progressive Change (CPC), All Nigeria Peoples Party (ANPP), some members from All Progressives Grand Alliance (APGA) and the new PDP, which was a faction of the then ruling party.

“We put together a committee with clear terms of reference on how to remove the PDP from power. The PDP thought it wasn’t going to be possible. But it happened,’’ the President said.

President Buhari told new members of the National Working Committee (NWC), which had been delegated powers of NEC for a period, to work towards keeping the party together by creating more room for discussions.

“There’s no time to develop differences among ourselves. We have no time for that,’’ he added.

The President commended Mai Mala Buni-led Caretaker/Extra-ordinary Convention Planning Committee (CECPC) and all its members for offering themselves to serve the party at a critical moment in utmost satisfaction despite all the attendant challenges, and for organizing the National Convention that produced the NWC.

“I must also sincerely thank all the aspirants for their desire to serve but had to withdraw their aspirations for the over-all interest of our Party. I consider it an honour to my person and an unwavering sacrifice for the unity of our great party as we approach the coming elections.

“I plead with all aspirants who were not elected to put in efforts in support of the leaderships of the Party to achieve our goal of success in the forthcoming elections. Furthermore I am pleading with all litigants to withdraw cases against the Party and put faith in party mechanisms.’’

“I enjoin you all to follow due process in all the party processes and more importantly to develop more mechanisms against corruption. I call on all party members to abide by all extant laws, rules, and regulations and to leaders of our party to avoid imposition of candidates that cannot win popular elections.

“This dictatorial behavior cost us many strategic seats in the past. In the recent past this led to some of our strong members unfortunately opting to go elsewhere because of unfairly oppressive behavior of party leaders at state level.

“I must caution strongly against any tendency towards developing cliques, in–fighting within the party. We want to win well not succumb to factions on account of personal acerbities and desire to retain control at all costs. That surely is not the road to win,’’ he said.

“You came in at a critical time and the entire party has a high expectation from you. The critical task ahead of you remains to continue to forge the unity of purpose among party members and to keep securing needful compromises in the interest of our great party,’’ the President noted.

President Buhari felicitated with party leaders and members for successfully conducting the Ward, Local Government, State Congresses, and the National Convention, in compliance with the Party Constitution.

“I enjoin you all to recognize the place of due process in all our tasks as managers of the party. We must develop party in-built mechanisms against corruption. Our success in 2023 will depend more on our capacity to respect our own extant rules, and regulations.

“Now that NEC has vested its powers in NWC for the time being, as requested, and in compliance with the Party Constitution in the overall interest of the Party, I want to assure Mr. Chairman and the entire NWC members of my full support,’’ he said.

In his remark, the APC Chairman appreciated President Buhari for always working for the unity and survival of the party, assuring that the NWC will further unite the party, and ensure victory at the polls.

“We must succeed, failure is not an option,’’ the APC Chairman said. 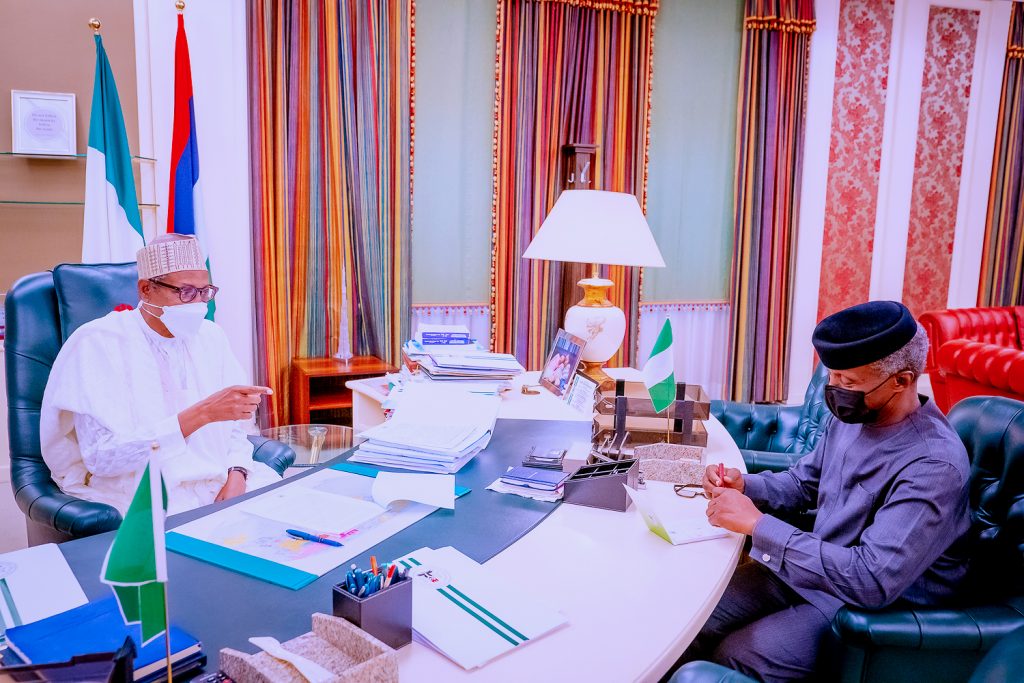