President Muhammadu Buhari has assured families that efforts were ongoing to ensure safe return of all those being held by bandits, directing security agencies and the Nigerian Railway Corporation (NRC) to provide more regular and detailed information to families.

Receiving some FCT residents at State House on Sallah homage Monday, the President said the government would explore every opportunity to secure the captives, alive and unhurt.

“As we celebrate this occasion with joy amidst friends and family members, we are fully conscious of the fact that many families in our country are in a state of fear and anxiety on account of the many captives held by terrorists against their will, including those taken away after the tragic bombing of the Abuja – Kaduna train.

“I have directed security agencies to ensure quick and safe recovery of all victims of kidnapping. I urge the railway management to immediately set up a situation room for the coordination of the rescue mission and for a minute by minute engagement with the families of the captives.

“This should ease their pain and anxiety as we push the military to finding a safe return to their families. My aim is to see all those in captivity safely rescued.

“Let me assure Nigerians that the bandits are just pushing their luck, but this is only for a while before they are finally crushed. They are using civilians as human shields, thereby making it difficult to confront them directly,” he said.

According to the President, bandits and terrorists, unlike professional soldiers, don’t respect the rules of engagement and could resort to harming hostages when attacked.

“They don’t care about killing their hostages if they come under attack. It’s a delicate situation that requires wisdom, caution and also patience. Any rescue operation that results in the death of any hostage cannot be deemed a success.

“The government doesn’t want this kind of tragic outcome. It’s a complex situation that demands proper handling. The primary objective of any rescue operation is to free the hostages safely, unharmed and alive.

“Let me make it clear, however, that defeating the terrorists and bandits requires more than weapons; we also need human intelligence which is necessary to frustrate terrorist plans. The people and community leaders should help our security officials with information about the activities or movements of criminal groups,” he added.

President Buhari urged Nigerians to create a hostile environment for criminals hiding in communities, admonishing that “by protecting criminals from exposure, you are endangering your own security and the security of your own community. No criminal can thrive in an environment where he faces the risks of exposure by the people.”

The President said a stronger synergy between security agencies and communities will make a huge difference in defeating banditry and terrorism in the country.

President Buhari allayed fears that bandits will grow to yet another big challenge as faced by the Boko Haram threat, assuring that the administration will not allow such to happen.

“This administration has allocated huge resources to improve the capacity of our security forces by timely giving them adequate equipment and improving the welfare of personnel to boost their morale.

“Abuja has witnessed remarkable improvements in terms of security. In the past terrorists had made it almost impossible to conduct our normal lives. Road barricades had overrun the capital city and people had to pray in fear because of the anxiety of terrorist attacks. No place in FCT was beyond the terrorist. Not the United Nations building, nor the Police Headquarters.

“But today, the situation is no longer so. We have significantly weakened and crippled the capabilities of the Boko Haram terrorists so much that they no longer have the ability to seize, and occupy any Nigerian territory without being repelled by our gallant troops.

“Of course, we can’t say that the terrorists are one hundred percent destroyed, but we have destroyed their ability to seize our territory. This improvement in terms of significantly weakening the enemy is necessary for finally defeating them. The rate at which the terrorists are giving up their weapons and surrendering to our troops is a significant and welcome development,” he told FCT residents.

The President commended the FCT Minister, Mohammed Musa Bello for diligently ensuring the capital city stays safe and attractive, while thanking the FCT residents for visiting the Presidential Villa.

“It’s my pleasure to welcome you all to the presidential villa. As is the tradition, people pay homage to the President as part of the events to mark the Sallah celebration.

“I value these kinds of visits because they afford me the opportunity to interact directly with the people or their representatives. I commend the FCT residents for living in peace and harmony for years since the capital officially came into being,” the President said.

President Buhari noted that the welfare of the people of Abuja and all Nigerians remains paramount.

“The physical development of Abuja and the provisions of infrastructure is our priority. Since the coming of this administration into power, we have made the completion of abandoned and ongoing projects our priority.

“For Abuja to attract investors as its population expands exponentially, the provision of infrastructure is essential. A Federal Capital should answer its name and it cannot do so if it lacks the necessary infrastructure to accommodate and accelerate development.

“Abuja has expanded beyond the imagination of even its planners. This expansion comes with great challenges. In line with its objectives to transform Abuja into a befitting modern city, the FCT administration under the Minister, Mohammed Musa Bello, has been doing a great job,” he added.

The President said the completion of the Abuja light rail is one of the major projects embarked on by the administration for the inhabitants as development of infrastructure remains essential to economic growth.

He said the government would continue giving serious attention to the town roads, link roads to other states, electricity and power.

“Our priority is the welfare of the people.

“The Second Niger Bridge which has dragged on for years is now to be completed by this government in October this year,” the President added.

Vice President Yemi Osinbajo who was also present, expressed his gratitude to the President on behalf of all the invited guests for hosting the homage. He recalled the last time such gathering was possible was in 2019 before the COVID-19 pandemic.

“We thank God Almighty for giving us back such opportunity. It also tells us that indeed everything and all belong to the Almighty God.

“if this program had held at your residence Mr. President, it would not have taken this large people, I think that even COVID-19 has a silver lining; here we are with so many people who are able to come.

“This is a perfect opportunity to thank God that our nation is together and united despite the challenges faced which is not peculiar to our nation only.

The Minister of the Federal Capital Territory, Mohammed Musa Bello, expressed his gratitude to God Almighty and to the President for the opportunity to celebrate the traditional Sallah homage at the State House  which was last held on June 4, 2019 when they came in during the Eid al-Fitr.

“I want to thank you also for graciously agreeing to allow us to come in with a high number of people representing a very large spectrum of the FCT community which includes religious leaders from various denominations, the Muslim and the Christian faith, the community leaders, the Judiciary, members of National Assembly representing the FCT as well as other stakeholders,” he said. 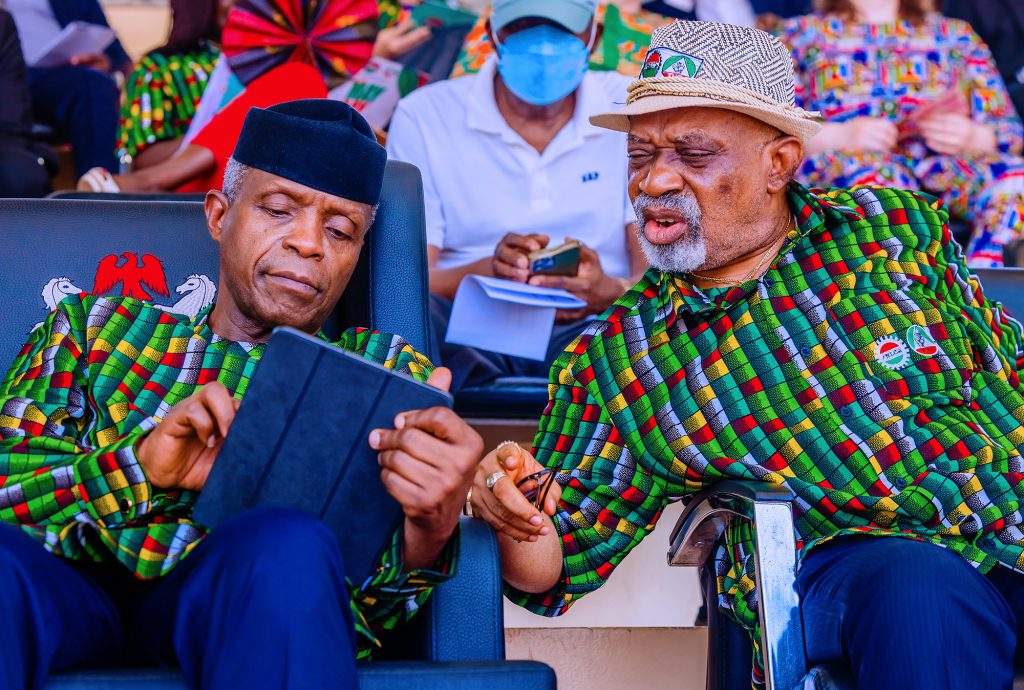 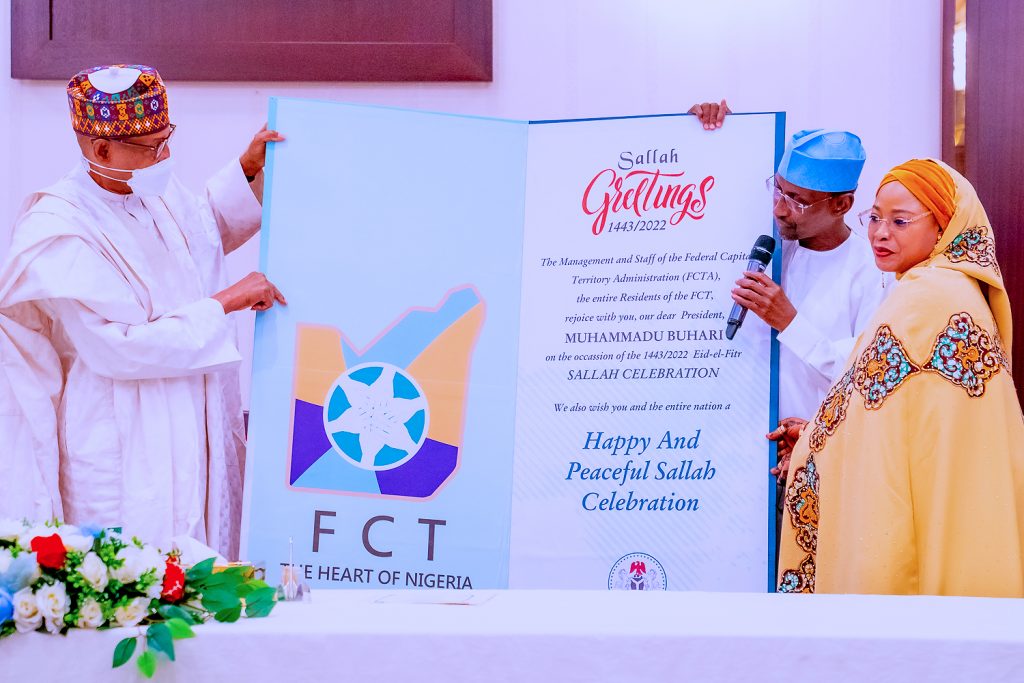