We can no Longer Ignore Poor Sanitation Practices- Osinbajo

*VP adds: the costs are too huge

The loss of lives and billions of naira to preventable water and sanitation related diseases as a result of inadequate basic water supply and sanitation services is huge and should be brought to an end by an active collaboration between States and the Federal Government, according to Vice President Yemi Osinbajo, SAN.

Prof. Osinbajo stated this in Abuja on Tuesday at the official roll out of the ‘Clean Nigeria: Use the Toilet’ Campaign under the National programme to End Open Defecation in Nigeria.

At the event attended by several governors and their representatives, ministers and market women, amongst others, the Vice President said, “…we all must redouble our efforts and work together in order to meet the nation’s Water Supply, Sanitation and Hygiene needs.”

“As a Nation we simply cannot afford the huge costs including fatalities caused by preventable water and sanitation related diseases as a result of inadequate WASH services. In contributing to the government’s efforts, citizens must take action to avoid open defecation.

“There is no need to debate the point that sanitation is a major public health issue and that poor sanitation adversely impacts us all. The World Bank report on the economic impact of poor sanitation due to use of unsanitary or shared toilets and open defecation, estimates that Nigeria loses N455 billion annually, with open defecation accounting for a third of this amount. These costs include health care, loss of productivity, premature deaths, poor educational outcomes, among others.”But perhaps some of the more dire costs of open defecation are those that cannot be quantified in monetary terms, the social costs, loss of dignity, lack of privacy and increased vulnerability to physical attacks and violence especially for women and girls,” the Vice President added.

Speaking further about the commitment of the Federal Government in addressing the menace the Vice President said the goal of putting an end to open defecation in Nigeria is a shared responsibility.

According to him, “Although we all know that the primary responsibility for provision of Water, Sanitation and Hygiene Services lie with the States and Local Government Areas, the Federal Government remains committed to supporting the States initiatives aimed at improving access to these services for the populace.

“To this end, States and the Federal Capital Territory should consider common sense policy measures such as ensuring that construction sites are equipped with toilet facilities.

“Property development control regulators can also make it mandatory for buildings to include external toilet facilities for staff such as security guards. These and other such measures will reduce the incidence of public defecation.

“As the President said during the launch of the National Action Plan last year, Federal Government’s support to States will be based on their commitment to implement the National WASH Action Plan in their respective states and to end open defecation by 2025. It is our expectation that this national launch will trigger State and LGA level launches leading to mass mobilization of all Nigerians.”

Speaking further, the Vice President said the Federal Government’s support to States will however be dependent on the efforts and shown by States in implementing their action plans for the WASH sector.

On the measures initiated to by the Federal Government to boost Water, Sanitation and Hygiene (WASH) across the country, the Vice President said, “this administration has consistently affirmed its commitment to the development of the WASH sector in Nigeria.”

According to him, “the launch of the National Action Plan for the revitalization of the WASH sector and the declaration of a State of Emergency by the President last year was among the many initiatives of Government in addressing the challenges confronting the sector.

“The National Action Plan is phased into Emergency, Recovery and Revitalization stages”.

The first and current phase, he said, “is the emergency phase of the Action Plan. In the emergency stage, it is our desire to aggressively mobilize the entire country towards ending the practice of open defecation”.

Earlier in his remark, the Minister of Water Resources, Alhaji Suleiman Adamu commended the collaboration with State governors and development partners in Nigeria’s quest to end open defecation by 2025.

He reiterated the Federal Government’s commitment to actualize the target of ending open defecation across the country by 2025. 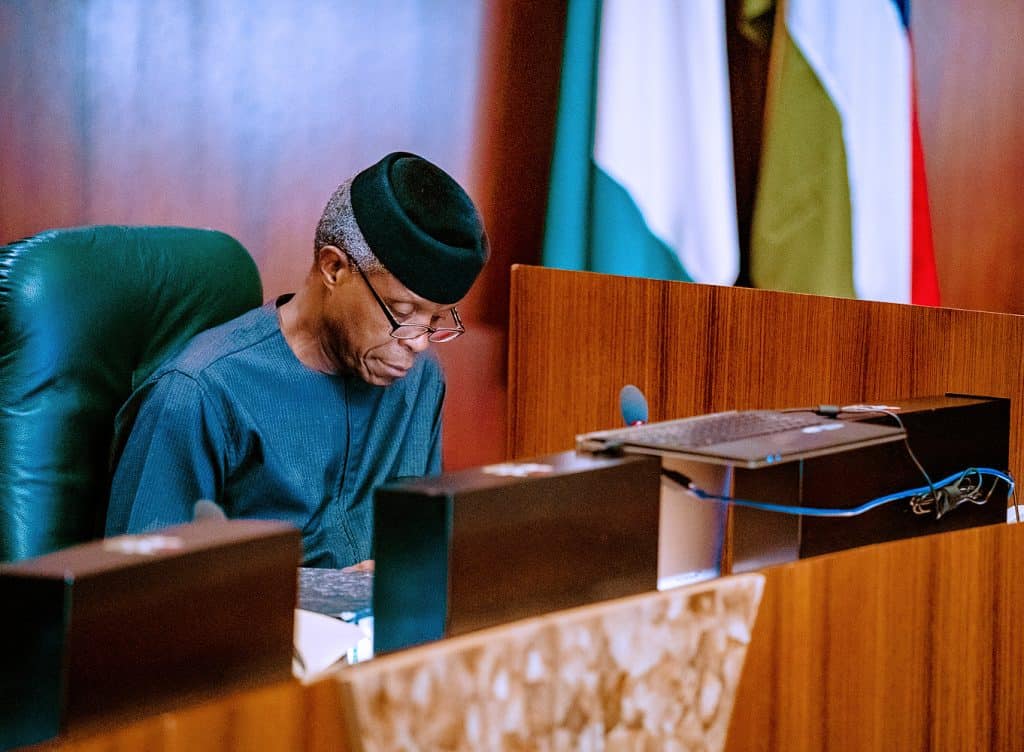