In furtherance of its New Vision development agenda for the Niger Delta, the Buhari Administration will ensure the completion of the critical projects it has embarked upon in the region, according to Vice President Yemi Osinbajo, SAN.

Prof. Osinbajo who was represented at the event by the Senior Special Assistant to the President on Niger Delta Affairs, Office of the Vice President, Mr. Edobor Iyamu, stated this on Tuesday at the 6th Anniversary Lecture/Niger Delta Awards Organised by Gbaramatu Voice Newspaper, which held in Lagos.

According to him, “in 2017, following my tour of the Niger Delta, which involved extensive consultations with key stakeholders in the region, the New Vision for the Niger Delta was birthed in response to the various challenges which had been plaguing our people. The objective of this New Vision is to ensure that the people of the region benefit maximally from their wealth, through promoting infrastructural developments, environmental remediation and local content development.”

Prof. Osinbajo said that the administration’s Niger Delta New Vision initiative has recorded some landmark achievements in the areas of education, environmental remediation, infrastructure and local content development, among others.

He added that “as part of the quest to expand economic opportunities in the region, this administration has promoted investments in modular refineries. The objective of this initiative is to address our present energy demands and empower the Niger Delta people through promoting local content.”

He also noted the ongoing remediation exercise in Ogoni land, Rivers State, which was kick-started by the Buhari administration under the recommendations of UNEP.

According to the VP, “It is important to note that the Ogoni clean-up is the first of its kind in the history of the Niger Delta. Indeed, this is the first time the Federal Government is directly involved in remediation activities within the region.”

“We are equally committed to expanding infrastructure in the region, this includes the ongoing construction work on the 34-kilometers Bonny-Bodo Road/Bridge, which has been abandoned for decades. When completed, the project, which was flagged off in October 2017, would connect several major communities and boost socio-economic development in the region.

“The Itakpe-Ajaokuta-Warri Rail Line project, which was commissioned by Mr. President in September 2020, and has the capacity to handle both passengers and freight services, is connecting several communities and promoting commerce within the region.

“The Federal Government is also developing a number of deep sea ports across the region, including the Bonny, Warri, and Ibom Deep Sea Ports, among other development projects such as the establishment of Export Processing Zones to boost economic activities.

“In 2018, the National Universities Commission (NUC) approved the commencement of undergraduate degree programmes at the Nigerian Maritime University in Okerenkoko, Delta State, which happens to be situated in the great Gbaramatu Kingdom.”

The Vice President noted that “beyond its oil wealth, the Niger Delta region is incredibly blessed with diverse human capital across education, sports, technology, creative arts, entertainment, economy, and many other sectors.”

Speaking on the theme of the event, “The Dwindling State of Crude Oil Demand in the Global Market: The Way Forward”, the Vice President stated that factors such as the attendant decline in demand for our crude oil, the impact of the COVID-19 pandemic on global energy demand and on government’s earning, the current situation, require creative and holistic approach to foster economic growth.

Noting that despite the fact that crude oil accounts for about 90 percent of Nigeria’s foreign exchange earnings, the VP stated that the Federal Government from inception had shown a commitment towards the creation of economic opportunities for Nigeria’s population in a post-oil future.

The Vice President highlighted initiatives being taken by the Federal Government to reposition Nigeria’s economy by taking advantage of global trends in the energy sector.

This includes the SolarPowerNaija Programme under the Economic Sustainability Plan (ESP) which will complement efforts towards providing affordable electricity access to 5 million households, serving about 25 million Nigerians in rural areas and under-served urban communities nationwide.

The VP also highlighted efforts by the Federal Government on energy transition from crude oil to natural gas, as well as its National Gas Expansion Programme, also a component under the ESP.

He said, “as part of our drive to encourage investments in gas production and optimize our nation’s enormous gas potential, the Federal Government declared the period of 2020-2030 as the decade of gas. To this end, last November, the Federal Government launched its National Gas Expansion Programme, which focuses on the distribution of Compressed Natural Gas (CNG) and Liquefied Petroleum Gas (LPG) across gas stations operated by the Nigerian National Petroleum Corporation (NNPC).

“By the end of this year, this administration will commence distribution of CNG as part of our strategy to gradually replace the high sulfur petrol. Our objective is two-fold. First, this is the administration’s effort at managing the necessary energy transition from crude oil to natural gas. We intend to increase our domestic gas supply to meet this demand by exploiting our abundant reserves of natural gas.

“Secondly, we are aiming to develop CNG into an alternative automobile fuel as a means of affording Nigerians cheaper, cleaner and additional fuel. In this way, we will reduce the ecological and economic costs of energy. The Gas Masterplan provides for investment in the necessary infrastructure for gas transportation across the nation. All of these will basically reduce our local crude oil dependency, whilst strengthening our drive for cleaner sources of energy as a nation. And crucially, it will create jobs in what will be a fast-expanding frontier of opportunity.”

In line with the Administration’s New Vision for the Niger Delta initiative to develop the region, the Vice President noted that the Federal Government has “also invested significantly in the Niger Delta as the region that holds the energy resources that have powered our progress for six decades as well as the keys to an emergent gas economy.”

The Vice President further noted that the Administration places top priority on peace and security in the region.

“In terms of addressing concerns around public safety and social security in the region, while ensuring peace and stability in the region, the administration has, among other things, sustained its commitment to the Presidential Amnesty Programme under which youths and ex-agitators are engaged in formal education, vocational skills acquisition and empowerment programmes that offer a pathway towards productive and dignified livelihoods,” he said.

Commending the publishers of Gbaramatu Voice Newspapers for organizing the event, the Vice President said the ‘cumulative effect of all these measures will have a positive transformational impact on the Niger Delta and on the future of our nation as a whole while ensuring sustainable peace and progress in the Niger Delta. 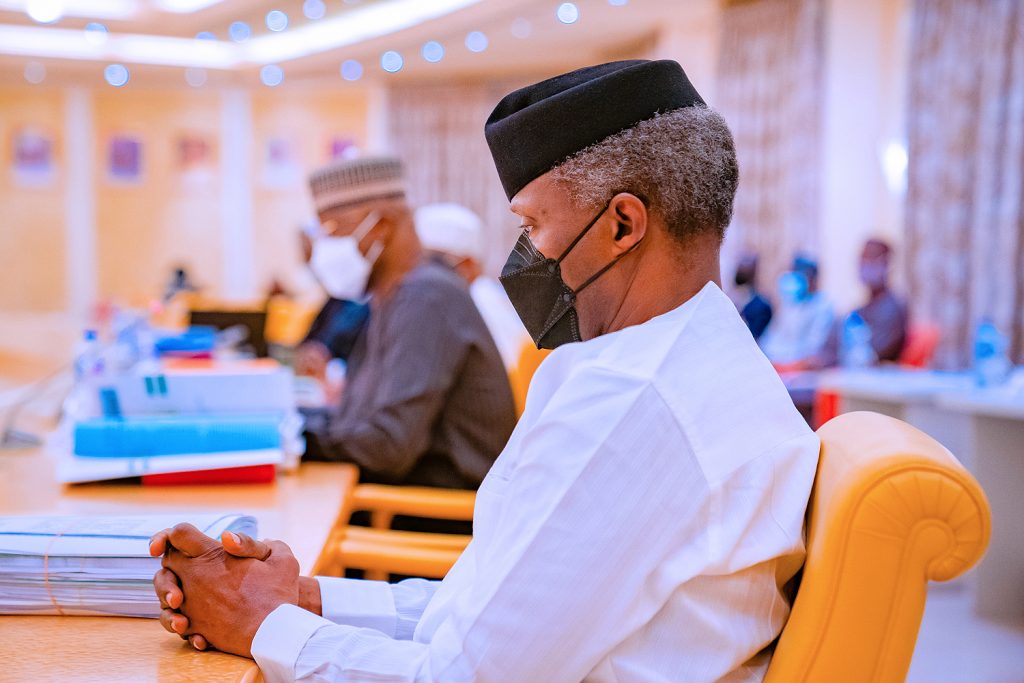