The Buhari administration will not relent in its support for innovative ideas and interventions that would help Micro, Small and Medium Enterprises (MSMEs) thrive. This in turn grows the economy and create more employment opportunities for young Nigerians especially, according to Vice President Yemi Osinbajo, SAN.

Prof. Osinbajo stated this while speaking virtually today at the official launch of the 2021 Bank of Industry (BOI) SME Academy, in conjunction with Procter & Gamble (P&G).
According to him, “the Federal Government believes wholeheartedly that SMEs – or rather, MSMEs – Micro, Small and Medium Enterprises – are the bedrock of our economy.

“This administration is determined to support small businesses, because we know that this is the way of growth and prosperity for our people, and that support is now even more necessary in the wake of the economic downturn caused by the COVID-19 pandemic. And it is exciting to see private sector partners who are just as committed to doing the same.”
While emphasising Government’s continued support for innovation and enterprise in the MSMEs sector, the VP commended the private sector for supporting the growth of small businesses through such initiative as the SME Academy.
“Thinking beyond just this event, as a government and as policymakers, we must take factors such as this into account, if we are convinced that MSMEs truly are the engines of growth in our economy,” he stated.

Highlighting the importance of MSMEs to economic growth, while referencing data from the National Bureau of Statistics (NBS), VP Osinbajo noted that MSMEs “contribute 48% of national GDP, account for 96% of all businesses and 84% of employment. Also, there are about 17.4 million MSMEs in the country, accounting for 50% of our industrial jobs and nearly 90% of the jobs in our manufacturing sector.
“It is essential for us to acknowledge how important MSMEs are for the economy. But in order for us to effectively target our efforts in their growth – in order for Micro businesses to become Small, for small businesses to become Medium – we must approach this data with nuance.”

Speaking further, Prof. Osinbajo stated that the vital role MSMEs play in driving economic growth is one reason why the Buhari administration decided to support vulnerable ones that have been affected by the COVID-19 global pandemic.
The VP further said that the Administration’s support for MSMEs is in tandem with its focus to also create more opportunities for young Nigerian entrepreneurs, and why it developed the Economic Sustainability Plan (ESP) to cushion the socio-economic effects of the pandemic on Nigerians.

“Entrepreneurs with the lowest turnovers are the most vulnerable to economic shocks like those that the pandemic has engendered and we must support them. One way we have begun implementing this is through the Survival Fund; offering payroll support to small businesses in order to safeguard at least 1.3 million jobs and offering interest-free credit for daily-paid and self-employed artisans,” VP Osinbajo stated.

Highlighting the impact of the Survival Fund on vulnerable small businesses nationwide, Prof. Osinbajo stated that, “almost 50% of micro businesses are owned by young people – Nigerians under the age of 35 – so it is encouraging to note that young Nigerians made up 82% of Payroll Support scheme recipients and have reported that for the first time in a long time, Nigerian MSMEs are satisfied with the transparent and seamless implementation of a Federal Government scheme.”
He buttressed his point on acceptance of the Scheme by Nigerians noting that when the registration portal first opened for 6 weeks, fewer Nigerians applied online compared to those that did when the portal reopened for about a week recently.
“The portal opened for 6 weeks and we received 463,000 applications. But once the implementation of the Scheme began and the portal reopened within one week, we received 892,000 applications,” he said.

The VP then explained that the whole purpose of the Survival Fund “is to ease some of the effects of the pandemic on our economy’s most vulnerable businesses and we have received an impressive number of testimonials from beneficiaries.”
Highlighting the importance of the SME Academy in contributing to the growth of small businesses, Prof. Osinbajo urged business owners and participants to “not only maximise the learning opportunities that came with this programme, but to find accessible ways to share what you learn with those who weren’t able to be here.” 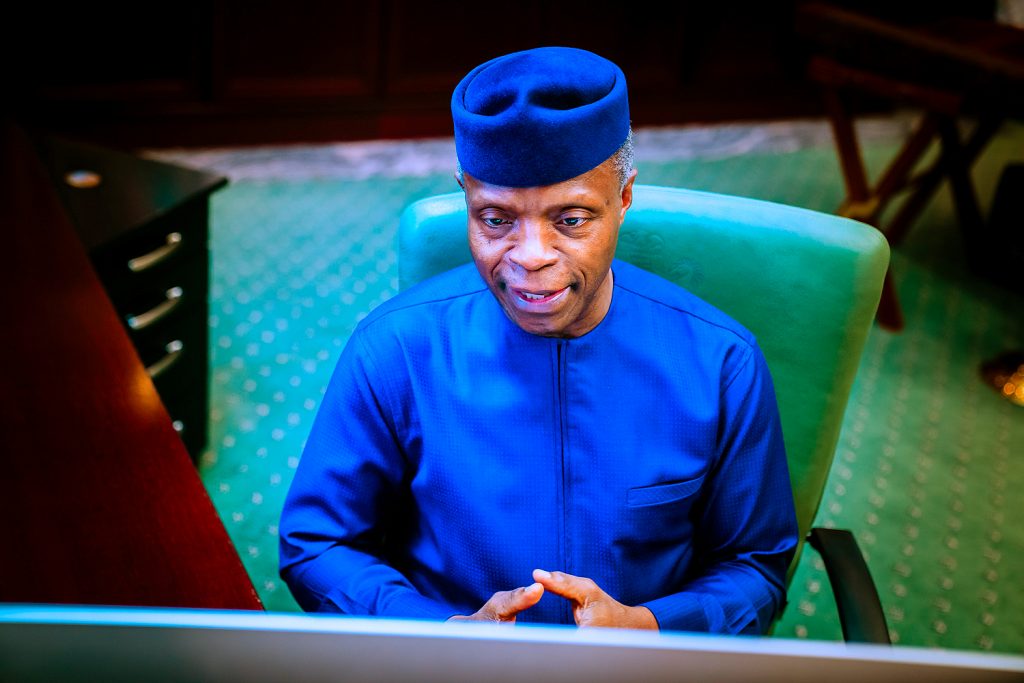