In order to improve the nation’s security architecture in line with global standards and more effectively tackle challenges nationwide, the Buhari administration is asking security agencies to leverage more technology-driven solutions and intelligence-driven collaboration, as the Federal Government is investing more in the sector.

Vice President Yemi Osinbajo, SAN, stated this today at the graduation ceremony of participants of the Executive Intelligence Management Course 14 at the National Institute for Security Studies, Bwari, Abuja.

According to Prof. Osinbajo, President Buhari “has emphasized an approach that leverages inter-agency collaboration, joint operations, technology-driven enablers and the optimization of existing capabilities to avoid duplication of resources and expenditure.”

The Vice President also noted the investments made and initiatives taken by the Administration to beef up the nation’s security architecture and protect the lives and property of Nigerians.

He said, “in May this year, arising from our deliberations in the National Security Council, the President established the Committee on Needs Assessment of National Security Requirements, which he tasked me to chair with the mandate of assessing the needs of the Defence, Security and Intelligence Agencies in the light of the current challenges and recommend options for containment. The President personally handpicked the membership of the Committee which had representation from the military, the police and the security and intelligence community.

“As a result of our work, the President signed a supplementary budget of N802 billion for the military, security and intelligence agencies. This was in keeping with his commitment since the outset of this administration to ensure that those charged with keeping Nigerians safe are adequately equipped for the job.”

In his speech, the VP then identified some major challenges in the security environment, such as the global dimensions to local security, country size and the challenge of covering extensive terrain, the availability and use of technology by criminal and terrorist individuals and groups, and inter-agency coordination.

However, he emphasized, in addition to improving the capacity of security agencies and intelligence, the importance of technology-driven solutions, in addressing the nation’s security challenges.

The VP explained that it is also “clear that we cannot secure or police a country of this size with human assets alone. We must, therefore, leverage technology.

“At a time when national resources are stretched thin, we have to come up with technology-driven solutions to addressing our security needs – whether we are discussing the policing of our borders or surveillance and reconnaissance programmes aimed at identifying criminal elements within our coastal waters, or locating terrorists hiding within the general population.”

Highlighting the impact of technology on enhancing security and cyber intelligence, the Vice President said, “When applied creatively, technology can be a force multiplier, amplifying our potential and capacity to effectively secure our territory.  It is not enough to know that we should deploy technology for surveillance and combat.”

“We must become much smarter in the deployment of Intelligence, surveillance and reconnaissance tools to compensate for the human resource deficits within our security establishment.

In the same vein, the VP urged the nation’s security and intelligence agencies to reinvent itself and adopt a more empirical and data-driven institutional culture defined by analytical and forensic rigour, while also emphasizing on inter-agency collaboration and synergy.

For instance, Prof. Osinbajo urged the adoption of cutting-edge technology to tackle security challenges and threats. “Our intelligence services must be proactive rather than reactive, ahead of the curve rather than behind it. Threats must be identified and addressed well before they evolve into manifest perils,” he stated.

He further said, “The business of intelligence necessarily entails the capacity to expect the unexpected and to foresee the impact of unintended consequences and Black Swan events – that is unpredictable events that are beyond what is normally expected of a situation and have potentially severe consequences.”

Speaking further, the VP urged the Course graduands from the National Institute on Security Studies that they must “not only know about these technologies, but also develop the expertise, even for writing the algorithms and codes for intelligent equipment.”

He disclosed that it was in recognition of the strategic value of the Institute that President Muhammadu Buhari in 2019 elevated it to the status of a “National Institute” by consenting to the bill establishing it.

Prof. Osinbajo praised the great foresight of the Institute’s founding fathers in establishing a “place of learning and research of this calibre to equip members of the security and intelligence community.”

While the VP noted the complexities of security challenges in today’s world, he added that security personnel are “functioning at the most advanced moment in human history,” so are better equipped and better resourced than before.

“In any event, it has fallen on you to be the generation of security and intelligence practitioners that will marshal Nigeria’s responses to the variety of threats that confront us. There is no doubt that in marshalling these responses, we must be smarter and more imaginative,” he stated.

The use of technology-driven solutions, the VP stated, would not only further address security complexities, but also checkmate the way “it has also empowered criminal non-state actors, with capabilities that just decades ago could only be exercised by nation- states.”

“For example, look at the various criminal and terrorist possibilities on the so-called Dark Web – a virtual underworld that hosts a global illicit economy and has proven difficult for state actors to infiltrate. Within this underground cyber universe, transactions around illicit drugs, weapons, child trafficking and even weapons of mass destruction are being conducted,” he said.

Congratulating the Board of the Institute and Course 14 graduands for also setting new standards of scholarship, excellence and creativity, the VP said the graduands could now be considered as “the crème de la crème of our security and intelligence services.”

Prof. Osinbajo said, “you represent the emergent leadership elite of this crucial arm of our defence and security infrastructure. What you know or do not know is what our defence architecture knows or does not know… The burden of responsibility you carry is an enormous one, because it literally is one of life and death. Your task is made more challenging because we exist today in a profoundly complex, and often volatile geo-strategic environment.”

Shortly after his speech at the NISS, the Vice President proceeded to Bida, in Niger State, to honour the invitation of the Bida Emirate to grace the turbaning ceremony of some eminent persons.

Also present at the NISS event was the First Lady, Mrs. Aisha Buhari, several First Ladies from the States, Federal Ministers of the FCT and Women Affairs: Muhammed Musa Bello and Dame Pauline Tallen respectively. There were other eminent Nigerians and top functionaries from the Executive and Legislative arms of government, including the Director-General of the Directorate of State Security Services, Yusuf Magaji Bichi, and other officials. 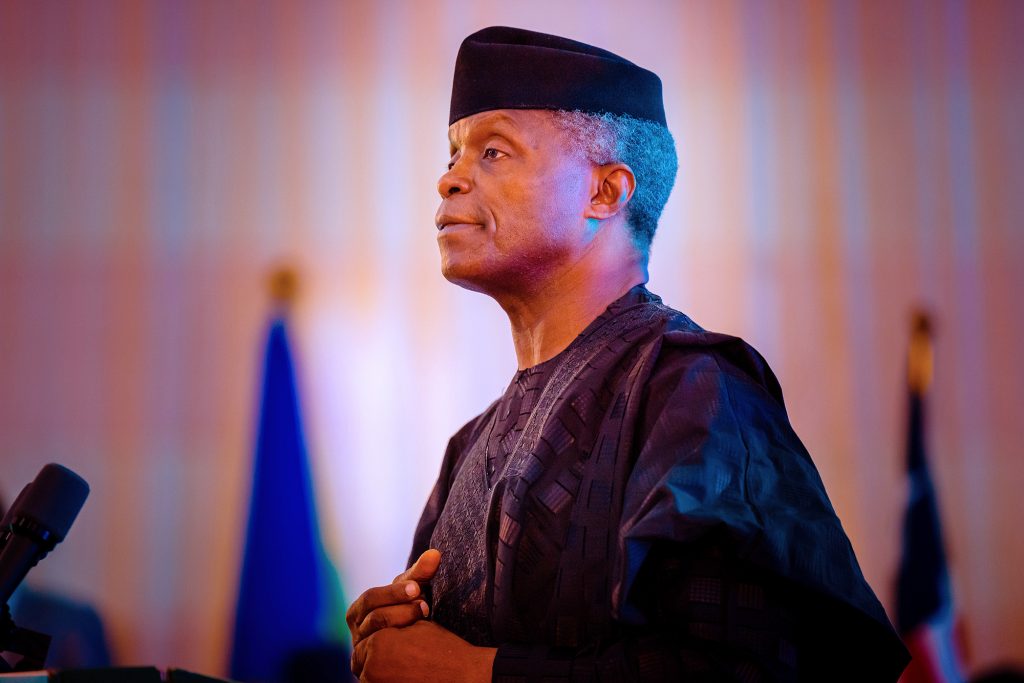