Despite earning far less than previous administrations, the Buhari presidency has achieved so much in its efforts to reverse the years of abandonment, decay and impunity as evident in the changes seen across different sectors of the economy, and national life, according to Vice President Yemi Osinbajo, SAN.

Prof. Osinbajo who stated this on Saturday at the 2018 Annual Lecture of the Barewa Old Boys Association (BOBA) in Sokoto, insisted that “clearly, we may not have seen all of what we expect to see, but the changes in our nation are not so difficult to see”.

He spoke after guest speaker, Rtd. Justice Lawal Hassan Gummi, now Emir of Gummi, spoke about the challenges of the judiciary and democracy in Nigeria. In the presentation of the retired judge, he challenged the change agenda profile of the Buhari administration.

The Vice President, however, noted that the Buhari administration had set an enviable record by refraining from interference in the affairs of the other arms of government.

Prof. Osinbajo also stated that the changes, which cut across every sphere of the Nigerian society, have been brought about by democratic processes under the Buhari administration.

According to him, “today, if we ask our brothers and sisters in the North East, who watched Boko Haram seize 14 local governments as of 2014; saw schools and major roads closed; and who could not celebrate Sallah or Christmas for many years, then perhaps, we will find that they will say that they have seen some changes.”

He continued: “Or if we were to ask the farmers who are enjoying the credit support and Agric inputs made available by the Anchor Borrowers Programme, and getting a more stable supply of fertilizer because of the Presidential Fertilizer Initiative, and also getting it at significantly cheaper prices, perhaps they might say that there have been some changes.

“Or if we were to ask the 500,000 graduates who have been employed under the N-Power programme, and this N-Power programme is a direct government employment, and they are trained, using a tablet such as the one that I am holding, in various entrepreneurial skills, including code writing and all that, to be useful to themselves even after the programme, perhaps, they might say that they have seen some changes.

“If we ask the pensioners – Nigeria Airways staff, Delta Steel Company staff, Ex-Biafra Police Officers, etc. – who before now received no form of pension after several years of abandonment, but are now getting paid; perhaps, they might say that they have seen some change.

“And the petty traders who are getting microcredit from the Federal Government, many of them, (we are doing 2 million), they were long ignored, no one ever paid attention to the poorest of our people in the value chain. Today, they are getting some attention, they are opening bank accounts to save money. If you ask them, perhaps, they might say, they have seen some change.”

Speaking further on the evidences of the impact the Buhari administration had made on Nigerians, Prof. Osinbajo said, “better still, if we were to ask the 9.2 million schoolchildren and their parents in 48,000 schools in 26 States nationwide, who are eating one meal a day, perhaps, they may say, they have seen some change.”

“The 297,000 indigent Nigerians in 20 States are now receiving monthly stipends under the Conditional Cash Transfer Programme, each of those beneficiaries would argue that there is change.

“Ask the contractors who have returned to site since 2016, because our budget for roads has grown 20-fold since then. Ask the artisans and labourers who have found jobs on all the many road, rail, power and housing projects. There is no state without an ongoing major Federal Government project that passes through it, today,” Prof. Osinbajo added.

On the Executive’s relationship with other arms of government, the Vice President said, “under President Buhari, the National Assembly, in my view, has been the most independent since 1999, and there has been no attempt under this government to stampede the legislature.

“I think it is fair to say that the Executive has refrained from interfering with the National Assembly’s choice of its leadership and the conduct of its affairs. It is easy to forget that Nigeria had five Senate Presidents between 1999 and 2007. Several Governors were forcefully impeached by legislatures acting at the behest of the Federal Government.

“Joshua Dariye: impeached by five Legislators at about 6am in 2006. The 5-man House of Assembly met under tight security and impeached the Governor, the Deputy Governor, Michael Botmang was immediately sworn in. Peter Obi was Impeached by Legislators who moved into Awka at 5 am and began sitting shortly thereafter in 2006.”

Another area where Nigerians would see change, the Vice President added, would be in the fight against corruption.

He said: “A lot of the impunity that had come to define the public sector in Nigeria, in terms of corruption, has been curbed.

Most important and impactful, the VP continued, is the elimination of “Grand” corruption.

“The days of overnight withdrawals from public treasury of 289 Million Dollars, in cash, will surely not return. The days of $16 Billion power projects without power are also gone for good. The days of fraudulent oil contracts in Nigeria that in one instance cost us Three Billion dollars ($3B) are over. Neither do we see arbitrary allocations of oil blocks to friends and cronies under this administration.

“The policy of this government is direct procurement, with respect to security equipment, from original equipment manufacturers, which leaves no room for fraudulent agencies and rent seeking, has helped a big deal. These days, the Government is achieving more with little. Despite earning 60% less than the previous Government, we have spent N2.7 trillion on capital, the highest in the history of Nigeria.”

On the issue of justice, the Vice President said, “the Nigerian elite see justice from the point of view of how they are treated and not in the interest of the masses.”

According to him, “Justice for the majority of our people who are poor and dispossessed has a different definition. And that is why I have been greatly inspired by the thoughts of Mallam Aminu Kano because he understood what the concept of social justice means.”

While commending the executives Barewa Old Boys Association for their contributions to the development of the nation, the Vice President urged members to remain steadfast and join in the efforts towards building a united and progressive society as envisaged by foundation members of the association.

Laolu Akande
Senior Special Assistant to the President on Media and Publicity
Office of the Vice President
05th November, 2018 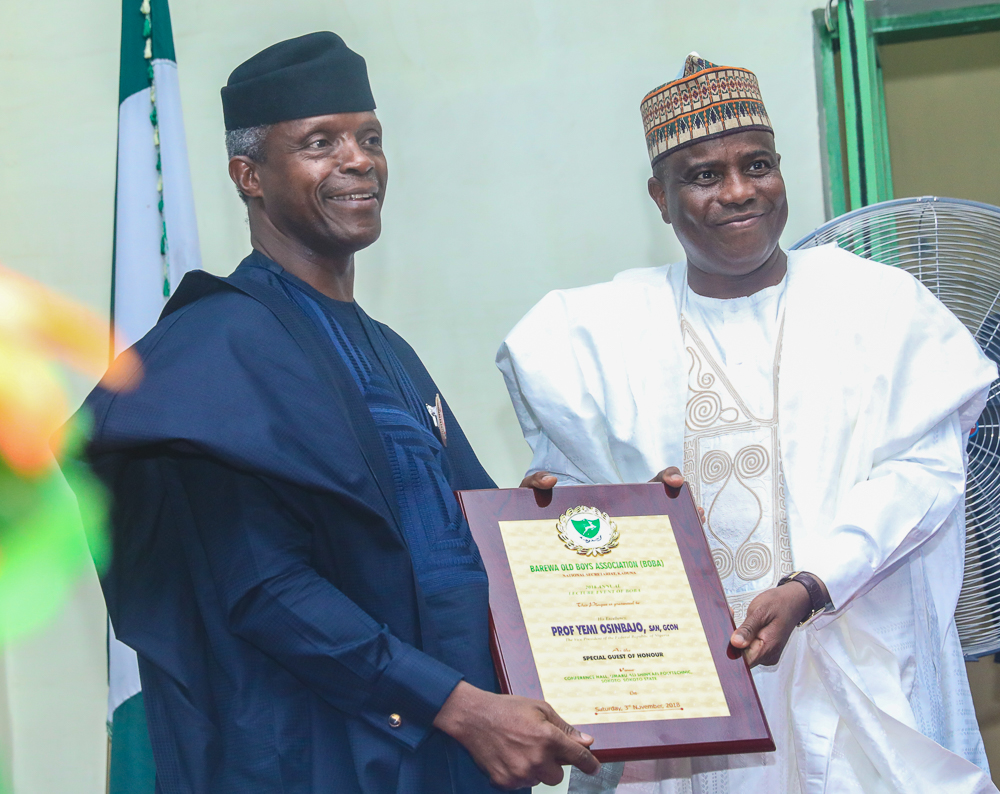