*VP inspects progress of work done in the Apapa area

*Expresses hope that gridlock will be cleared soon

The Federal Government is adopting short-term, mid-term and long-term measures, including improving infrastructure, towards resolving the Apapa gridlock and easing traffic around the area, according to Vice President Yemi Osinbajo, SAN.

Prof. Osinbajo stated this on Saturday, when he went round the Apapa area in Lagos State to inspect progress of ongoing work to clear the gridlock.

The Vice President visited different areas of Apapa, including the truck terminal near Ijora, the entrance to the Nigerian Ports Authority (NPA), Liverpool and Tin Can Island, as well as several road projects in the area to ascertain the level of work done by the Presidential Task Force saddled with the responsibility of clearing the area.

Speaking to reporters after the inspection, Prof. Osinbajo, who was accompanied by Lagos State Governor Babajide Sanwo-Olu, and the Managing Director, NPA, Hadiza Bala-Usman, said a lot of work has been done so far, with more to be accomplished.

He said, “What I have seen is that a lot has been done. The best way of understanding this is to see that there are several aspects of the task that has to be done. First, there is infrastructure around the ports, and I’m sure you’ve seen, going around with us, that a lot of that has been done. We think that we are in a very good place, especially with respect to the improvement of infrastructure.

“The other thing is in the clearing of the trailers and tankers along the various routes. I’m sure you have seen there is considerable improvement. One of the mid to long-term measures is trying to decongest the traffic coming into the port, cargo traffic coming into the port and coming out of the port. This is a port that is meant to take 34 million metric tonnes of cargo, but is now doing over 80 million metric tonnes today. So, there is obviously a need to find alternatives and to expand where that is possible.”

It would be recalled that the Presidential task team began its work on May 24, following a Presidential directive issued for the immediate clearing up of the Apapa gridlock and the restoration of law and order to Apapa and its environs. The directive mandated the immediate removal of all trucks from the bridges and roads within Apapa and all adjoining streets leading into the Apapa axis, to allow for free flow of traffic around the area.

Following a request by members of the task force and other stakeholders, Vice President Osinbajo, earlier in June at a meeting at the Presidential Villa, Abuja, approved the extension of the previous deadline. The task force, which commenced its assignment on May 24, is now expected to present a formal report at the end of its extended mandate on June 24.

Speaking further, the Vice President said, “The other thing is in the clearing of the trailers and tankers along the various routes and I’m sure you have seen there is considerable improvement. The Mile 2 end of it is where there is some difficulty but we think that in the next couple of days that will be resolved, especially with the opening up of the Tin Can Island Trailer Park and the palliative work that is going all the way down to Mile 2. So, we think that we should be able to resolve that congestion in the Mile 2 end. And of course, you have seen that the entry to the port is essentially clear.

“Of course, the Lekki Port is an ongoing project and we expect that will be of great help to supporting the Apapa, TinCan Island ports and then we are dredging the Warri Port also. Then just to decongest, to ensure that the traffic of cargo out of the port is effectively done, you know that the Lagos-Kano rail line is also starting from the Apapa Port.

“So, we expect that we should be able to get cargo out of the Apapa Port, using the standard gauge rail to take cargo out of the Apapa Port out to the hinterland. Then of course we are using barges at the moment; the NPA is using barges. So, there are several approaches to this. But as you can imagine, this is a very busy port; Nigeria is a very busy place for commerce. So, traffic is bound to increase.”

On ways to sustain the work done to decongest the traffic in the area, Prof. Osinbajo said having understood what the problem is, and with the work done so far to resolve it, there was no doubt that it would be sustained.

The VP added, “So, the way to go about it is what I have explained, namely: improve the capacity of other ports around, such as the Warri Port. The Lekki Port is also another option; and then improve the infrastructure around it, which is what we are doing. The way to sustain it is just that because we understand why there was congestion. By addressing those concerns, we are able to resolve it. So, I think it will be sustainable.” 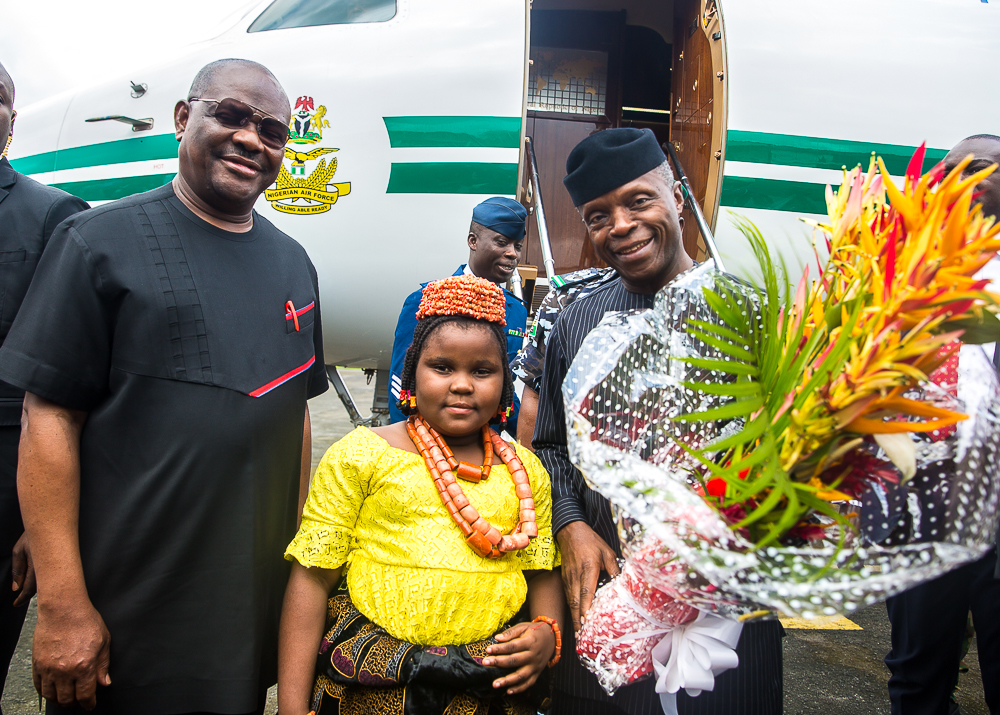 Next Post Osinbajo Leaves for the US Today, to Meet Vice President Pence, Council on Foreign Relations, Others