How Africa, Europe can Collaborate to Tap Benefit of Digital Economy, By VP Osinbajo at Europe-Africa Forum

Africa and Europe must work together to advance and harvest the economic benefits of digital economy, and at the same time prevent a counter-productive widening of the digital gap, according to Vice President Yemi Osinbajo, SAN.

Prof. Osinbajo stated this today at the Africa-Europe High-Level Forum in Vienna, Austria, which had in attendance other African and European Heads of States or Government.

The meeting organized by the European Union and African Union, held in Vienna, Austria on Monday, December 17, and Tuesday, December 18.

Speaking on the forum’s theme ‘Taking cooperation to the digital age’, the Vice President noted that investments in digital technology can make important contribution to growth and development by fostering productivity gains from continuous innovation.

He said, “Given our fast-growing population in Africa, we are, of course, keen to work together to boost the job creation potential of new technologies rather than concentrating on jobs destined to disappear in the digital age. Faster growth, sustainable development and job creation are also vital for reducing irregular migration from Africa to Europe. In our globalized world, people can see disparities in standards of living across regions quite easily. This means there must be increasing openings for entrepreneurship and jobs in home countries for those who would otherwise embark on risk journeys in search of opportunities. In Nigeria we are taking urgent and practical steps to provide such opportunities for our rapidly increasing youth population.”

Prof. Osinbajo also highlighted the strides made by the Buhari administration in developing Nigeria’s technology sector through supporting public-private sector initiatives and the advisory group on technology and creativity.

Noting that the advisory group has been working to build an ecosystem for funding, training, infrastructure and intellectual property protection, the Vice President added that the country’s Social Investment Programme has been leveraging on technology tools to drive it in its bid to improve the economy and lives of Nigerians.

He said, “Under our social investment programme, 75,000 young people are being trained in coding, software development, hardware maintenance, animation and data management, and we’re set to train another 200,000 young men and women. Similarly, we have established 8 technology hubs to support tech startups across our six geopolitical zones and two major cities of Abuja and Lagos.

“We’ve encouraged partnership to establish venture funds to support innovation and are now engaged in talks to establish a $500 million innovation funds with bilateral and multilateral partners.

“We’ll be deploying digital methods and tools on a larger scale to expand learning opportunities for younger Nigerians, as conventional education through brick and mortar institution can no longer be viable given the huge numbers and limited resources. Already, 200,000 out of our 500,000 young graduates in our N-Power scheme have tablet devices, which we use for on-the-job training and further skills acquisition. This experience will guide our efforts as we seek to expand digital literacy at earlier stages of education.

“Similarly, our education curriculum is being reworked to emphasize Science, Technology, Engineering, Arts, and Mathematics. The Arts have been included because of the growing recognition of the strengths of our country, especially in the arts, music, film and literature.”

Prof. Osinbajo also highlighted the growth in e-commerce in Nigeria, with references to leading e-commerce platforms that have leveraged on technology to grow their businesses.

He said, “Financial technology is being used in our efforts to rapidly scale up financial inclusion. Working with our banks, TELCOs and FinTech companies, we’ve used digital tools and platforms to provide interest-free micro loans to up to 1.3 million Nigerians and about 300,000 received Conditional Cash Transfers by the same means. We hire, pay and train online 500,000 young men and women in the largest post-tertiary direct jobs programme in Africa. Through participation in this scheme, present and future beneficiaries would be brought into databases for unique biometric identification.

The Vice president also thanked European countries for their support, while calling on other EU member states to partner with Nigeria and Africa to impart skills, raise resources, promote investment and provide infrastructure to build a digital economy.

“I’m optimistic that our efforts would attract strong support and active engagement of our partners in the European Union. Indeed, already, we have some good examples of that in the African Digital leaders Training programme, which is a partnership between Ventures Platform of Nigeria and Enterprise Lithuania with funding from the European Union. This innovative programme would provide digital skills training for 50 young Nigerians in Lithuania, while at the same time, relieving temporary labour shortage in that country. A reintegration component is also built into the package.

“We have a moment in the history of Europe-Africa relations that can yield tremendous mutual benefits. Let us seize this moment,” he said.

Several African and European Heads of Government attended the High-Level forum. They include the Austrian Federal Chancellor, Sebastian Kurz; the Prime Ministers of Netherlands, Mark Rutte; Poland, Mateusz Morawiecki; Hungary, Viktor Orban; Czech Republic, Andrej Babis; and deputy Prime Minister of Ireland. African Heads of Government at the meeting include the President of Rwanda, who is also the Chairperson of the African Union, Paul Kagame; President of Ghana, Nana Akufo-Addo; Egypt’s Abdel-Fattah Al-Sisi; Kenya’s Uhuru Kenyatta; and Prime Minister of Mauritius, Pravind Kumar, among others.

Earlier on Monday night, Prof. Osinbajo had an interactive session with the Nigerian community in Austria during a town hall meeting.

Adding that Nigeria must tackle “the monster of corruption,”, the Vice President added, “there is no country in the world that can survive when its resources are stolen the way our resources were stolen. It doesn’t really matter how you slice it or describe it, so long as a few people can take government or public resources and do with it as they like, they are not likely to be able to do the basic.”

He also urged Nigerians to continue to support the work of the administration in making the country better through provision of more infrastructure and tackling grand corruption, among other development initiatives.

“Today our country earns 60 per cent less than it earned five years ago, but we have spent N2.7 trillion in two budget cycle in infrastructure, that is the highest in the history of our country,” he said.

Laolu Akande
Senior Special Assistant to the President on Media and Publicity
Office of the Vice President
18th December, 2018

Previous Post Buhari at 76: Why we Love this President 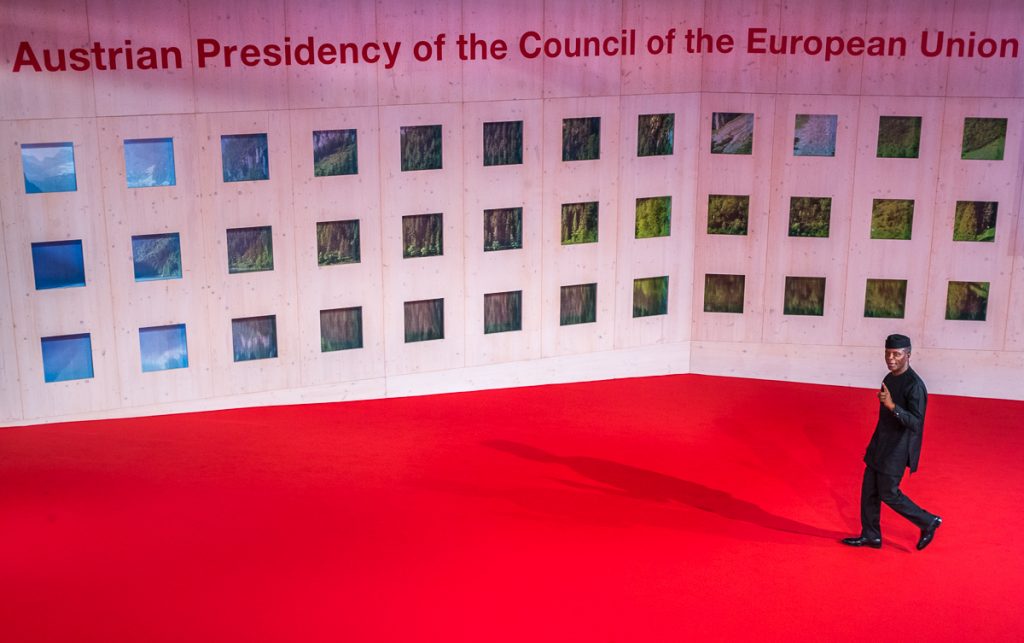