Nigeria is Going to be the Envy of the World Soon, says VP Osinbajo on Indepandence Day

“The reason why we are so optimistic is because we know that we are the best, we know we are going to excel, it may seem like it’s taking a while, and there are many problems, but every one of the over 1,000 days that I have been Vice President for, I grow stronger in my complete confidence that we are going to be the envy of the whole world in a few short years. Well, you might say that that is optimistic, why not, I am a Nigerian” – VP Osinbajo

Remarks by His Excellency, Prof. Yemi Osinbajo, SAN, GCON, Vice President of the Federal Republic of Nigeria, at the Independence Day Dinner and Gala Night Held at the State House Banquet Hall, Abuja, on Monday, October 1, 2018.

I am extremely pleased to be here to join you all at this special anniversary dinner. I also must thank you all very much for honouring our invitation to be here to celebrate our country, especially on this 58th anniversary of our Independence. I am 61 years old this year, and most of those six decades I have lived here in this country, here in Nigeria. So, I think I can say that I know Nigeria quite well.

A few years ago, a poll reported in The British Independent newspaper declared us the happiest people on earth. The same poll said that we were also amongst the most optimistic people on earth, despite everything that we’ve experienced as a nation. I agree with both assessments, in other words, that we are possibly one of the happiest in the world, but I must also add that we are by far the most humorous people on the face of the earth. Well, if you don’t agree with me, but I can tell you so many reasons why we are the most humourous.

A few months ago, an important Nigerian politician who was on his way to a trial in a court said he was abducted. And after he escaped from his abductors, he remained hiding on a tree for 11 hours. The most interesting part of that story is that many people online in particular, on the Internet, started to tell stories of different birds and how long those birds could remain perched on a tree. All these were the Nigerian contributions to that story.

Yet another very important politician insists, and still insists that the most important attribute for leadership is dancing, and boy could he dance! And for those who think that that is ridiculous at least 200,000 people voted for him in a particular election.

When I served as Adviser to the Attorney General of the Federation between 1987 and 1992, I had a driver who was always broke. But he was always so optimistic. He had 14 children, while I, his boss, had only one child at the time. And I asked him, “Why do you just keep having so many children?” Of course he had more than one wife. He said to me in Yoruba “I don’t know which of them can become President of Nigeria. So, the more I have, the better my chances.” How optimistic can you be? Only a Nigerian can be that optimistic.

Wherever we are from, from whatever part of this great country that we are from, whether we are from the North, the South-South, the South East, West, wherever, we have the same DNA. We love our country and this may not always be obvious, but you try insulting Nigeria if you are a foreigner and you will see our fierce and angry our reaction can be. A Nigerian can say the same thing, but if you’re a foreigner, don’t try it.

We love our food, we love our clothes, we love our merrymaking. We love to be successful and we love success. We are resilient, we are fair minded. Nigerians always fight for the underdog, we believe in justice and the rule of law, even though our system still can do much better. But we are by far one of the smartest and, perhaps, the most talented people on earth. And I don’t say that lightly.

A Nigerian family, The Imafidons, who live in the UK, have been officially been declared the smartest family in the UK, a family of about six children who have excelled in their academics in incredible ways. The designer of that famous car, Chevrolet Volt, is a guy called Jelani Aliyu, he now works for the Nigerian government; super talented Nigerian from Sokoto State. And for those who think that we are only giants in technology and business, Anthony Joshua is the world’s best heavyweight boxer, for those who watch boxing.

Everybody is dancing to Nigerian music, and our traditional attires, especially our women attires and headgears have conquered Africa. Even our male attire, there’s just something about the Nigerian swag. Whether they like it or not, we Nigerians are just exceptional, we are just different. Anywhere you go, you know a Nigerian, don’t you recognize a Nigerian when you see one? You can just tell. If you see anyone reading a book on How to become self-confident, know that he is not a Nigerian, we are born self-confident.

The reason why we are so optimistic is because we know that we are the best, we know we are going to excel, it may seem like it’s taking a while, and there are many problems, but every one of the over 1,000 days that I have been Vice President for, I grow stronger in my complete confidence that we are going to be the envy of the whole world in a few short years. Well, you might say that that is optimistic, why not, I am a Nigerian.

Released by:
Laolu Akande
Senior Special Assistant to the President on Media and Publicity
Office of the Vice President
2nd October, 2018 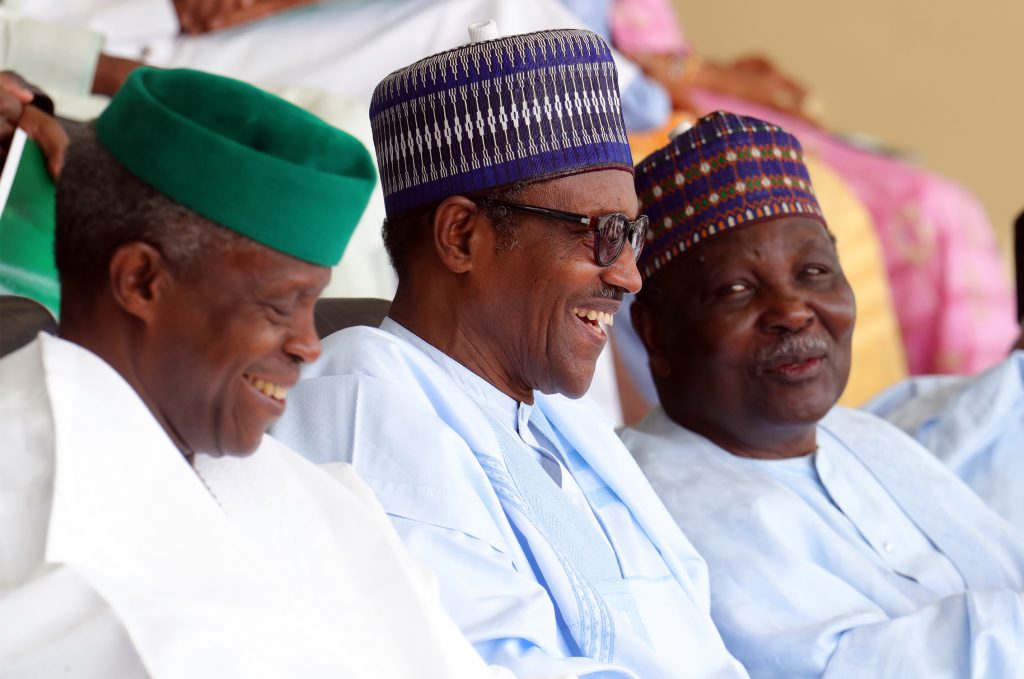