President Buhari’s Speech at the Signing of the 2018 Appropriation Bill into Law at the Presidential Villa, Abuja

I would like to thank the leadership of the National Assembly, particularly the Senate President and the Speaker of the House of Representatives, as well as all the Distinguished Senators and Honourable Members, for passing the 2018 Appropriation Bill, after seven months.

When I submitted the 2018 Budget proposals to the National Assembly on 7th November 2017, I had hoped that the usual legislative review process would be quick, so as to move Nigeria towards a predictable January-December financial year. The importance of this predictability cannot be overemphasized.

While the Federal Government’s budget represents less than 10% of aggregate yearly expenditures in the economy, it has a very significant accelerator effect on the financial plans of other tiers of government, and even more importantly, the private sector, which mostly operates on a January-December financial year.

Notwithstanding the delay this year, I am determined to continue to work with the National Assembly towards improving the budgeting process and restoring our country to the January-December fiscal cycle.

I note, with pleasure, that the National Assembly is working on the enactment of an Organic Budget Law, so as to improve the efficiency of the nation’s budgetary process.

As I mentioned during the presentation of the 2018 Appropriation Bill, we intend to use the 2018 Budget to consolidate the achievements of previous budgets and deliver on Nigeria’s Economic Recovery and Growth Plan (ERGP) 2017-2020.

It is in this regard that I am concerned about some of the changes that the National Assembly has made to the budget proposals that I presented. The logic behind the Constitutional direction that budgets should be proposed by the Executive is that, it is the Executive that knows and defines its policies and projects.

Unfortunately, that has not been given much regard in what has been sent to me. The National Assembly made cuts amounting to 347 billion Naira in the allocations to 4,700 projects submitted to them for consideration and introduced 6,403 projects of their own amounting to 578 billion Naira.

Many of the projects cut are critical and may be difficult, if not impossible, to implement with the reduced allocation. Some of the new projects inserted by the National Assembly have not been properly conceptualized, designed and costed and will therefore be difficult to execute.

Furthermore, many of these new projects introduced by the National Assembly have been added to the budgets of most MDAs with no consideration for institutional capacity to execute them or the incremental recurrent expenditure that may be required.

As it is, some of these projects relate to matters that are the responsibility of the States and Local Governments, and for which the Federal Government should therefore not be unduly burdened.

Such examples of projects from which cuts were made are as follows:

a. The provisions for some nationally/regionally strategic infrastructure projects such as Counter-part funding for the Mambilla Power Plant, Second Niger Bridge/ancillary roads, the East-West Road, Bonny-Bodo Road, Lagos-Ibadan Expressway and Itakpe-Ajaokuta Rail Project were cut by an aggregate of 11.5 billion Naira.

b. Similarly, provisions for some ongoing critical infrastructure projects in the FCT, Abuja especially major arterial roads and the mass transit rail project, were cut by a total of 7.5 billion Naira.

d. The provisions for various Strategic Interventions in the health sector such as the upgrade of some tertiary health institutions, transport and storage of vaccines through the cold chain supply system, provision of anti-retroviral drugs for persons on treatment, establishment of chemotherapy centres and procurement of dialysis consumables were cut by an aggregate amount of 7.45 billion Naira.

e. The provision for security infrastructure in the 104 Unity Schools across the country were cut by 3 billion Naira at a time when securing our students against acts of terrorism ought to be a major concern of government.

f. The provision for the Federal Government’s National Housing Programme was cut by 8.7 billion Naira.

g. At a time when we are working with Labour to address compensation-related issues, a total of 5 billion Naira was cut from the provisions for Pension Redemption Fund and Public Service Wage Adjustment.

h. The provisions for Export Expansion Grant (EEG) and Special Economic Zones/Industrial Parks, which are key industrialization initiatives of this Administration, were cut by a total of 14.5 billion Naira.

i. The provision for Construction of the Terminal Building at Enugu Airport was cut from 2 billion Naira to 500 million Naira which will further delay the completion of this critical project.

j. The Take-off Grant for the Maritime University in Delta State, a key strategic initiative of the Federal Government, was cut from 5 billion Naira to 3.4 billion Naira.

k. About seventy (70) new road projects have been inserted into the budget of the Federal Ministry of Power, Works and Housing. In doing so, the National Assembly applied some of the additional funds expected from the upward review of the oil price benchmark to the Ministry’s vote. Regrettably, however, in order to make provision for some of the new roads, the amounts allocated to some strategic major roads have been cut by the National Assembly.

Another area of concern is the increase by the National Assembly of the provisions for Statutory Transfers by an aggregate of 73.96 billion Naira. Most of these increases are for recurrent expenditure at a time we are trying to keep down the cost of governance.

Notwithstanding the above stated observations, I have decided to sign the 2018 Budget in order not to further slowdown the pace of recovery of our economy, which has doubtlessly been affected by the delay in passing the budget.

However, it is my intention to seek to remedy some of the most critical of these issues through a supplementary and/or amendment budget which I hope the National Assembly will be able to expeditiously consider.

I am pleased with the success recorded in the implementation of the 2017 Budget. A total sum of 1.5 trillion Naira has been released for the implementation of capital projects during the 2017 fiscal year. In response to this and other policy measures implemented, we have observed significant improvement in the performance of the Nigerian economy.

To achieve the laudable objectives of the 2018 Budget, we will work very hard to generate the revenues required to finance our projects and programmes. The positive global oil market outlook, as well as continuing improvement in non-oil revenues, make us optimistic about our ability to finance the budget.

The 2018 Budget I have just signed into law provides for aggregate expenditures of 9.12 trillion Naira, which is 22.6% higher than the 2017 Appropriation. Further details of the approved budget will be provided by the Minister of Budget and National Planning.

I thank the Ministers of Budget and National Planning, the Budget Office of the Federation, and everyone who worked tirelessly and sacrificed so much to bring us to this day. However, the job is only partly done.

I am sure you will remain committed to advancing our Change Agenda, not only in the preparation of the national budget, but also in ensuring its effective implementation.

I thank you and may God bless Nigeria. 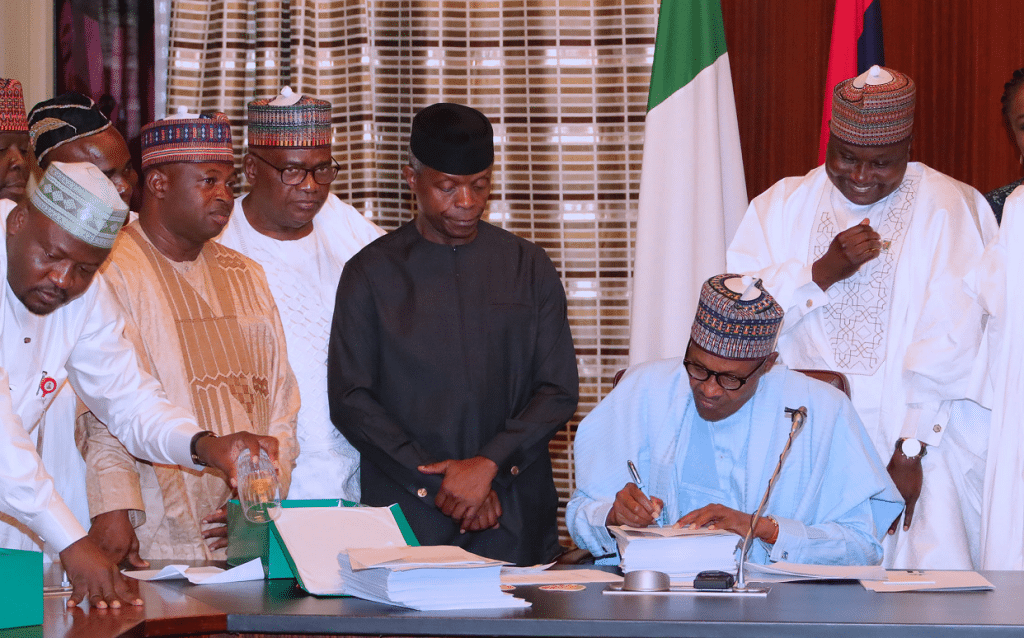