I welcome everyone gathered here today for the first meeting of the newly-elected National Executive Committee of our party, the All Progressives Congress (APC), after the National Convention held in June, 2018.

The new NEC members assumed duties at very critical and challenging times. With General Elections coming in early 2019 any political party worth its salt must get its internal dynamics right, and march as a team towards a decisive time as that of major elections in a country.

Today, we are meeting to look at some major decisions that will get us ready for an excellent performance at the polls next year, starting with party primaries at various levels. I urge you all to ensure that decisions taken here today are those that will avail the good of the party, and ones that meet the yearnings and expectations of our teeming members and supporters nationwide. They look up to us for guidance, and we must not disappoint or fail them.

Let me congratulate the current leadership of our party, led by Comrade Adams Oshiomhole. The team emerged at a most turbulent time, when there were rumours and speculations of massive defection, in a way to possibly rock the very foundations of the party.

Despite conciliatory attempts to keep the house together, some members were hell-bent on pulling down the roofs. They left, plotting to go along with scores of people, thus upsetting the apple cart. But due to the yeoman’s work by the new party leadership, the exit barely made a dent in our superstructure, as they could not muster the figures they had envisaged to cause an upset, particularly in the two chambers of the National Assembly. APC remains in control, and increases by the day, with quality people joining our fold. I say congratulations to the new NEC members.

Hope is rekindled in our hearts that we will give our country purposeful leadership that will improve the quality of lives of the people. We will continue to secure the country, fight graft, and position the economy in a way that jobs can be provided for our youths, and give them a future and a hope.

We will fulfill all the promises we have made to Nigerians. We are fulfilling them, and will continue to serve with heart and might, to build a nation where peace, justice, and prosperity shall reign.

Our primaries must be in complete compliance with the provisions of the Constitution of the Federal Republic of Nigeria 1999, the Electoral Act and above all the constitution of our great party, APC.

The times in which we are call for unity, harmony and togetherness. Let us all join hands to move the party forward. We must take our party to the next level, and I urge all and sundry to give support to our National Working Committee.

Thank you very much, God bless our party and the Federal Republic of Nigeria. 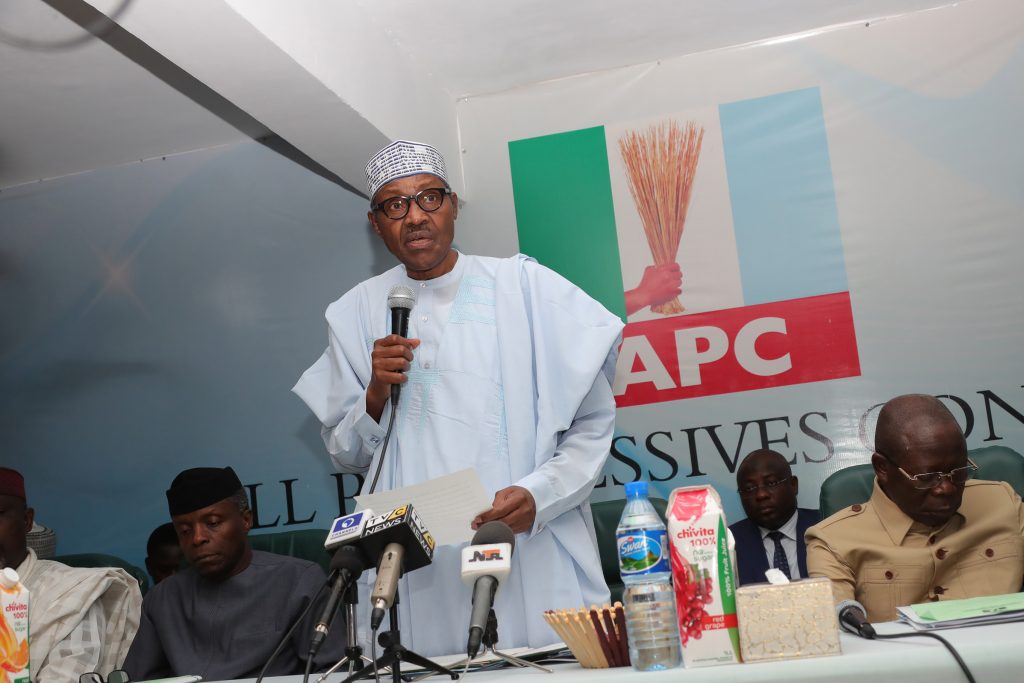