I am delighted to be part of the inaugural edition of the Paris Peace Forum and would like to commend the Government of France for this laudable initiative.

2. We also thank France for inviting Nigeria to participate in the forum on the sidelines of the Centenary Celebration of the Armistice. It is important to recall that although Nigeria was not independent at the time, the fact remains that it had participated in the war efforts.

3. Nigeria contributed a company of riflemen and support services to the war under the Royal West African Frontier Forces.

4. I should like on this Remembrance Day, to pay tribute to the sacrifice and bravery of all those who had fallen in battle and the pain and suffering of those they left behind.

5. More than half a million Africans fought in the trenches of the First World War for France alone. There was bitter fighting also in east and southern Africa and around Cameroon and Nigeria. We shall not forget.

6. I believe this Forum would provide the needed opportunity for knowledgeable exchange and sharing of best practices on the challenges militating against the much needed good governance in many countries of the world. It is on this premise that my presentation will dwell on “Illicit Financial Flows And Corruption: The Challenge of Global Governance”.

a. Draining of foreign exchange reserves;

b. Reduction of tax/revenue collection;

c. Poor investment inflows due to near absence of credibility, transparency and policy stability.

8. Illicit financial flows escalate poverty by denying the citizens the benefit of the resources meant for development.

9. This is a crime of opportunity which thrives most in permissive environments. Such outflows further undermine the rule of law, stifle trade and worsen macro-economic conditions.

10. These reprehensible acts are being perpetrated by several international tax havens and secret jurisdictions, which facilitate the operation of:

11. Indeed, Illicit Financial Flows have exacerbated poverty and inequality in many societies of the world. Thus, concerted and multi-jurisdictional efforts must be deployed to frontally tackle the menace.

12. Combating corruption has been a defining feature of our Government. Upon assuming office on 29th May, 2015, we made fighting corruption one of the three pillars of our Administration’s priority programmes, given the fact that corruption was threatening the very foundation of our national life, socio-economic development, security and even the consolidation of our democracy.

13. We continue to demonstrate zero tolerance for corrupt practices and non-conformity conduct in public life, by confronting corruption head-on. This is predicated on the fact that we remain steadfast in our commitment of ensuring integrity and ethical conduct in the task of governance. We are mindful of the primacy of leadership by example in this regard.

14. Our efforts at fighting corruption are firmly within the limits of the rule of law, in spite of the interest-forcing strategies of those who chose to discountenance the fundamental value of compliance with the laws of the land.

15. With the progress we have made, we feel the need to ensure that we put enduring institutional frameworks in place for action and measures that will consolidate our achievements in the fight against Illicit Financial Flows and corruption.

16. In the circumstances, strengthening the institutional capacity of anti-corruption bodies has been accorded due attention. For us, therefore, effective institutions and political will are strong counter-measures against corruption and Illicit Financial Flows.

17. In addition, we introduced the Whistle-Blowing policy, whereby information on the violation of financial regulations, mismanagement of public funds and assets, financial malpractices or fraud as well as theft can be reported to authorities.

18. This policy is geared towards ensuring public accountability and transparency, and it has yielded dividends, as we have recovered billions of Naira from corrupt persons and companies.

19. We have also redirected recovered funds to the development of critical infrastructure and programmes that will benefit our people. Funds and assets recovered through our actions, will be deployed in delivering the Sustainable Development Goals (SDGs).

20. At the continental level, the African Union also launched the war against corruption and bestowed on me the honour to champion the cause. In this connection, our priorities for international cooperation as a continent will focus on the following:

a. Strengthening international cooperation on asset tracing, recovery and repatriation;

b. Enhancing cooperation between the African Union and the United Nations’ anti-corruption monitoring mechanisms through stronger engagement; and

c. Widening the understanding and relevance of anti-corruption efforts towards the realization of Agenda 2063 and the Sustainable Development Goals.

21. Appropriate legislation and policies which promote transparent financial transactions should be encouraged.

22. In addition, regulatory institutions and agencies should be strengthened to fight corruption. Nigeria has a good example in this regard with the Tax Appeal Tribunal inaugurated recently. The Tribunal arbitrates between tax payers and government in order to ensure equity and fairness in tax administration.

23. In accordance with relevant international statutes, asset return is unconditional. It is a commitment which members of the international community must abide by.

24. Nigeria, therefore, reiterates its commitment to all existing international legal frameworks to enforce anti-corruption measures, including the recovery and return of stolen assets.

25. While acknowledging the tremendous progress that has been achieved through the enactment of global instruments, some fundamental technical issues remain unresolved.

26. These revolve around the formulation of policy and regulatory frameworks that cut across different jurisdictions. We must not lose sight of the role played by secret companies, banks and law firms, all too often based in developed economies and their related offshore centres.

27. Recent studies reveal that flaws in the global financial system enable corrupt individuals to hide details of their financial dealings under the noses of governments and law enforcement agencies. This underscores the need to urgently address the issue of Mutual Legal Assistance, as well as continental legal frameworks, in the context of safe havens for illicit transfers.

28. Our experience in Nigeria is that financial crimes, such as corruption and fraudulent activities, generate enormous unlawful profits which often prove so lucrative that the threat of a jail term is not sufficient to deter perpetrators.

29. A more powerful deterrent is to ensure that profits and assets generated from illicit financial flows and corruption are recovered and returned to countries of origin.

30. This is not to under-estimate the value of strong institutions. It only indicates that asset recovery represents significant deterrence compared to the traditional focus on obtaining conviction by the law enforcement agencies of the countries of origin.

31. As we take stock of the strengths and weaknesses of domestic, regional and international mechanisms against Illicit Financial Flows, I seize this opportunity to recall the Global Declaration Against Corruption made in London in 2016 and our commitment thereto.

32. Among other things, the Declaration encapsulates our collective commitment to the principles of Open Government Partnership, especially the National Action Plans to actualize beneficial ownership transparency, enhance the capacity of Financial Intelligence Units (FIUs), reinforce Independent Reporting Mechanisms and support the activities of the Global Forum on Transparency and Exchange of Information for Tax Purposes. We should remain resolute in our commitment to the aforementioned goals.

34. I would like to reiterate that the Government of Nigeria remains open and is ever willing to continue to identify and share experiences and strategies to give life to the ideas that will lead to winning the fight against corruption.

35. Finally, let me reiterate the importance of unity and collective action. It is only together that we stand a better chance to win the fight against the menace of Illicit Financial Flows and corruption.

I thank you for your patience and attention. 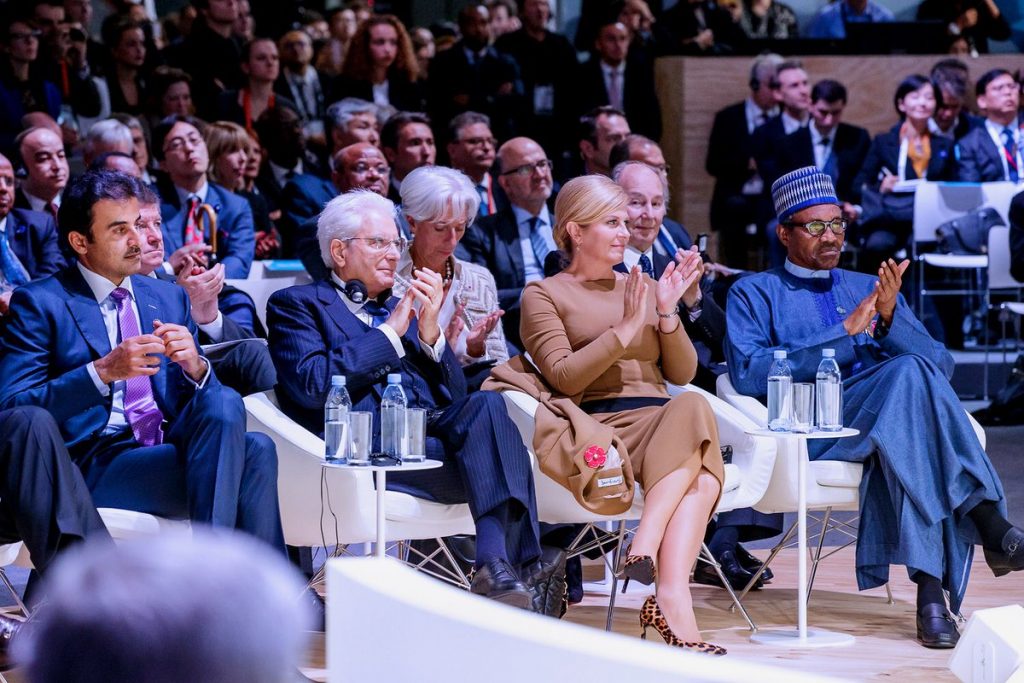