Taking more than 40 questions from the Nigerian community in New York Sunday night, Vice President Yemi Osinbajo, SAN, has reassured Nigerians in Diaspora about the determination of the Buhari administration to secure the country and prosper the people.

Prof. Osinbajo stated this while responding to questions during a townhall meeting with some members of the Nigerian community in New York.

The forum with Nigerians in the Diaspora was one of the activities lined up for the Vice President’s visit to the United States.

According to him, “there is really nothing serious to worry about because we are taking the necessary steps to address issues relating to herders/farmers clashes, kidnappings and others.”

While highlighting different aspects of the Federal Government’s agenda at the townhall meeting in midtown Manhattan, Prof. Osinbajo said the whole essence of the policies and programmes on social welfare, health care and others is to take majority of Nigerians out of poverty.

He said “the reason why we decided to have what we call the Social Investment Programmes is basically because it is one of the ways to address the problem of poverty in Nigeria.

“Nigeria has never systematically addressed the poverty problem in the way that India, which used to have the largest population of poor people, have done.

“As at 2010, Nigeria had a population of about 112.7 million people living in extreme poverty and there was nothing in place to address the problem, no social investment programme, no social security, no way of getting people out of poverty.

“So, the National Social Investment Programme was to address questions of how to get our people out of poverty and to address the major concerns of poverty.”

Continuing, Prof. Osinbajo said “some people are so poor that they cannot afford the basics of life, so the disbursement of N5,000 monthly stipends to such people under the Conditional Cash Transfer has gone a long way in helping them.”

“Dealing with the problem of poverty is so huge that we also came up with the Government Enterprise and Empowerment Programme (GEEP) where we give interest-free loans to petty traders under what we call the TraderMoni scheme.

“These are traders at the bottom of pyramid in our economic value chain, those whose inventory are sometimes not more than N5,000. They are given N10,000 and when they pay back, they get higher amounts up to N100,000.

“The same thing we are doing with the Homegrown School Feeding Programme where we give children in public schools a free meal every day, and we are feeding about 9.5 million children in 31 states. This initiative is key to addressing one of the issues associated with poverty, which is malnutrition. And we have found that as a result of this programme, school enrolment figures have gone up significantly.

“Also, part of the reasons why we are doing this is first the multiplier, because it is homegrown; the entire value chain is serviced locally, including the cooks who are picked from the locality of the school,” Prof. Osinbajo added.

On measuring the impact of the schemes, Prof. Osinbajo said an impact assessment report on the cash transfer and the microcredit schemes would be released before the end of September 2019.

According to the Vice President “we are trying to measure the impact and we have put together a team with the World Bank assisting us. We also have one or two organizations who are trying to do this measurement for us and I believe that in the next two months we should have at least the first report looking at some of the impact of the microcredit schemes and the conditional cash transfers.

“But a lot of these things are intuitive. I don’t think that there is any great difficulty in knowing that when people are enabled it makes things easier for them and people can see the results.”

On health care funding, the Vice President said the Federal Government was committed to addressing the challenge of inadequate funding through an innovative approach that takes care of the poor in the society.

According to him, “what we have done is to follow the provision of the Health Act which says that 1% of our Consolidated Revenue Fund (CRF) must go to health care and that is what we have done. For the first time, for the 2018 budget, we have set aside the 1 % of the CRF for health.

“Aside from that we also have the basic health care provision fund which we are running in all of the states. This is the Federal Government contribution which is matched by the states to deal with primary health care issues.

“The challenge is that you cannot deal with health care from government budget alone. This is the reason why the National Health Insurance is very important for us. An amendment has been effected to make contributory health insurance compulsory.

“For us, one of the problems to address is the large numbers of poor people. So, in determining what that premium will be, we decided that government will pay 35% of the premium so that those who cannot afford to pay are taken care of by government.”

On pensions, Prof. Osinbajo said the Buhari administration had through several interventions resolved some issues with pensioners in different organisations and sectors including the Nigerian Airways, military and paramilitary organisations, civil service and parastatals, amongst others.

He added that the bailout funds released to some states by the Buhari administration were, in many instances, meant to pay arrears of pensions and salaries.

On leveraging human capital in the Diaspora to complement development efforts in Nigeria, the Vice President said the establishment of the Diaspora Commission by the Buhari administration was one of the ways to show government’s commitment to work with Nigerian professionals in the Diaspora.

He said “the reason why the Diaspora Commission was set up is to address all the various concerns that the Diasporan have and that we also have as government and in some cases as institutions.

Prof. Osinbajo also urged them to work closely with the Diaspora Commission to identify ways of contributing to the development of the country.

Also present at the event was Hon. Justice Sylvanus Nsofor, Nigeria’s Ambassador to the United States; Prof. Tijjani Bade, Nigeria’s Permanent Representative at the United Nations and President of the UN General Assembly, amongst others.

Laolu Akande
Senior Special Assistant to the President on Media and Publicity
Office of the Vice President
25 June, 2019 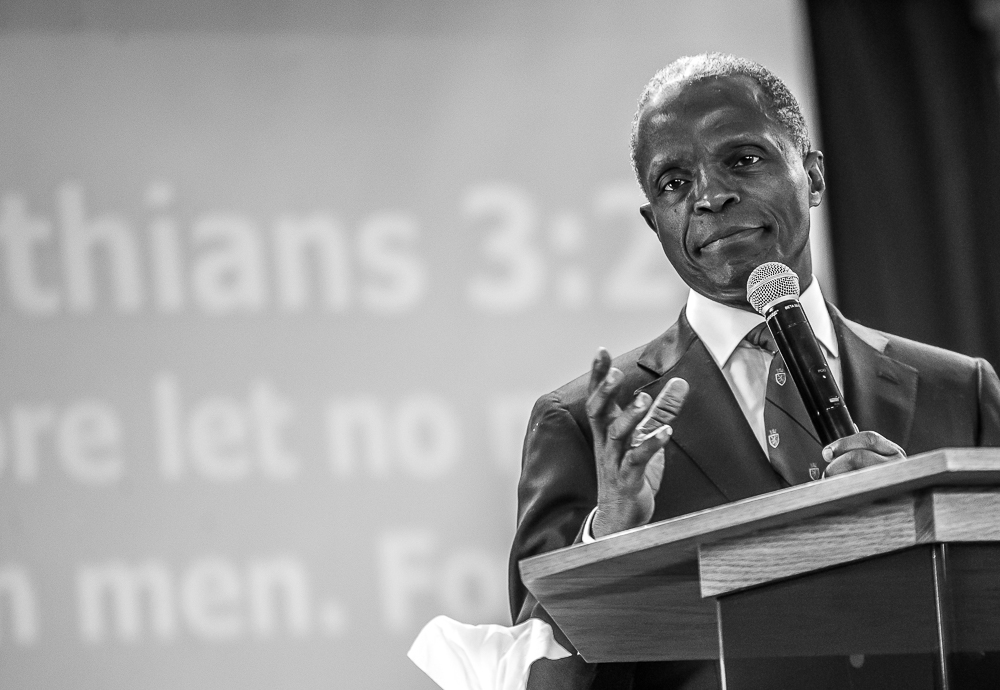 Next Post For the Records: What VP osinbajo Said on Kidnapping