*Adds: “the money that we make as a country must not be stolen by a few people”

President Muhammadu Buhari’s sole concern is that the resources of Nigeria must be used for the man and woman who need it the most and this explains the focus of the administration’s entire economic policy, according to Vice President Yemi Osinbajo, SAN.

The Vice President stated this today while monitoring the ongoing disbursement on the N10,000 collateral & interest-free loans under the TraderMoni Scheme in Dutse, Jigawa State.

He explained that all the Federal Government had tried to do in the past few years was to give hope to the common Nigerian through the various schemes for women, men and youths, regardless of their backgrounds.

According to him, “Mr President’s sole concern is that the resources of our country must be used for the man and woman who need it the most, the people in our society who are working hard, the farmers, the traders, and all of the young people who need jobs, that is the focus of Mr. President’s entire economic policy. It is on giving the common man hope so that they can live decent lives, they can provide shelter for themselves, feed and live well.”

While recalling the mindless stealing of resources that characterized previous administrations, Prof. Osinbajo said, “If the money of our people was not stolen, there would be enough for us to do what we want to do, the money that we make as a country must not be stolen by a few people”.

Prof. Osinbajo said despite the challenges associated with the fall in oil prices, President Buhari is still committed to giving hope to the poorest Nigerians hence, the implementation of the various components of the Social Investment Programmes.

He said: “Under the TraderMoni Scheme, we are giving 2 million people across Nigeria, N10,000 collateral-free loans with the possibility of increasing the amount within six months.

“We also have the Market Moni scheme which is another initiative for traders that are bigger than the petty traders and we start from N50,000 to N350,000.”

According to him, “This is the state where we have given the largest number of people, we have given 37,000 beneficiaries in this state, and every month these people receive the transfers.” The Conditional Cash Transfer is a N5000 monthly provision for the poorest and most vulnerable Nigerians.

Continuing on the gains made so far under the Social Investment Programme in the state, he said “under the School feeding programme, 434,000 children are being fed every day as 4000 cooks have been engaged to prepare the meals while 14,368 graduates have been engaged under the N-Power job creation scheme.”

On the State Government’s efforts in empowering young people, the Vice President said: “it is a fantastic evidence of the concern and planning in taking care of those who need help the most.”

“Let me say to you that the Governor and the Government of this State are working in line with the vision of Mr. President. He has always been concerned about the common man.

After the courtesy call on the Emir of Dutse, on arrival in Dutse, the Vice President proceeded to Kasuwan Tipa market to monitor the ongoing disbursement of loans under the Trader Moni scheme, and later also went to the Dutse Modern Market.

Prof. Osinbajo also attended the 6th phase of the Jigawa State Youth Empowerment Scheme held at the Aminu Kano Triangle, Dutse, where he praised the State Government for the initiative.

Laolu Akande
Senior Special Assistant to the President on Media and Publicity
Office of the Vice President
27th November, 2018 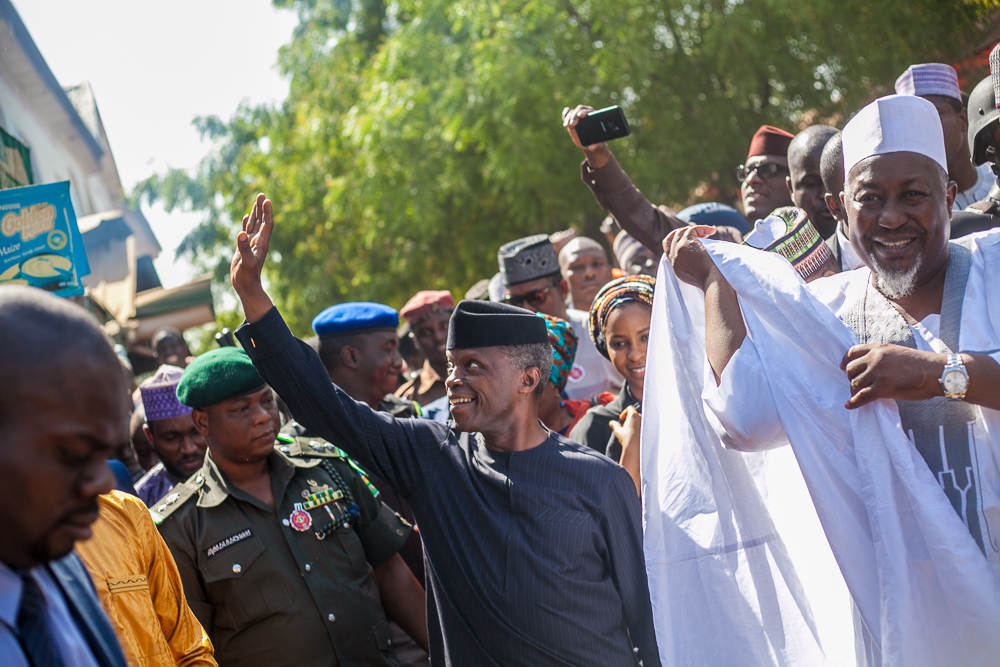