*Over 1.5 million petty traders nationwide are now beneficiaries of the N10,000 interest-free loans

*There is no wrong time to do what is right, VP says of scheme

*Adds: TraderMoni approved by NASS, no one would give loan to petty traders unless the FG

Providing interest-free loans to petty traders nationwide empowers ordinary Nigerians and helps to tackle poverty, while enabling those at the bottom of the economic ladder who work the hardest do better, according to Vice President Yemi Osinbajo, SAN.

Prof. Osinbajo stated this on Friday during his visit to Ilorin, Kwara State capital, where he launched the N10,000 collateral-free TraderMoni scheme in Ipata market.

The Vice President received what is perhaps one of the most rousing welcome since his travels around the country launching the TraderMoni scheme.

There was jubilation on the streets and palpable excitement in the market. Even at the Emir of Ilorin’s palace, the VP was received by praise-singing Kwarans who lined the road to the palace right to the door of the palace.

On several instances while heading out of the Ilorin airport on his arrival, Prof. Osinbajo had to get down, stop the convoy to acknowledge cheering crowds who took to the streets, bridges and roadsides singing, dancing and chanting ‘Sai Baba, Sai Buhari!’

At the market, the VP interacted with excited and delighted petty traders and beneficiaries of the micro-credit scheme.

So far, over 1.5 million petty traders nationwide are beneficiaries of TraderMoni, under the Government Enterprise and Empowerment Programmes, GEEP, one of the Social Investment Programmes of the Buhari administration.

“TraderMoni is a very important aspect of our economic policy. We believe that one of the ways to counter poverty and to enable those who work the hardest, and these are the petty traders, to empower them to enable them to be able to do better, we have to give them credit,” the Vice President, said while responding to questions on SOBI 101. 9 FM station in Ilorin, after the launch of the scheme.

Prof. Osinbajo noted that TraderMoni beneficiaries can graduate to the MarketMoni scheme where they can access loans from N50,000 to N350,000 or more.

The Vice President added that the Buhari administration will ensure fiscal transparency and integrity for the continuation of the programme.

Asked about sustainability he explained, “I believe that there is enough money to be able to take care of the scheme, and the needs of the people. We don’t steal public resources, so, yes, there will be enough money for the scheme.”

Responding to the claim in some quarters that Trader Moni is political, especially regarding the period of its implementation, the Vice President noted that “there is no wrong time to do the right thing.”

Prof. Osinbajo said the microcredit scheme, being one of the Programmes under GEEP, was approved by National Assembly.

He said, “First of all, this a programme which was duly approved by the National Assembly. We started this programme (Government Enterprise and Empowerment Programme, GEEP) since 2016 and it has two other schemes – Market Moni and Trader Moni.

“Now, majority of the National Assembly approved it, and we’ve been implementing it. We’ve implemented it across the 36 states of the federation. I have been to Calabar (Cross River), Imo, Lagos, Ondo and Edo states, and quite a number of states already, to launch this same programme.

“I think there is never a wrong time to do the right thing. We started this programme almost 18 months ago. We had to wait until NASS approved money before we went on with the programme.”

Wondering why some politicians complained about a microcredit scheme which benefits the poor, the VP noted that in 2010, about 300 elite Nigerians owed banks over N5 Trillion, until the Central Bank and the Federal Government had to bail out the affected banks which almost went insolvent and nobody complained.

The Buhari administration’s interest-free N10,000 TraderMoni is a part of its National Social Intervention Programmes (N-SIP), and is designed to assist petty traders across the country expand their trade through the provision of collateral and interest-free loans from N10,000. The loans are repayable over a period of six months, after which the traders get more.

The microcredit scheme, which has since been formally launched nationwide and the FCT, is expected to reach 2 million petty traders by the end of the year.

The Vice President, who also paid courtesy visit to the Emir of Ilorin, HRH Alhaji Ibrahim Kolapo Sulu-Gambari, in his Palace, commended the Emir for ensuring that peace exist in Kwara State.

“I want to say that we are extremely proud of you. We are very glad because Kwara State remains the place of peace all the time, a place where people can pursue their businesses, pursue their beliefs without any fear. And I think this is very good indeed,” the Vice President said, adding that “it’s one of the most peaceful states all over our country.”

Also, during a town hall meeting where Prof. Osinbajo interacted with APC stakeholders and youths, he urged them to work harder to ensure the party wins the 2019 election. He also appreciated the people of the state for coming out en masse to welcome him.

Earlier, the Chairman of the APC in Kwara State, Hon. Basir Omolaja Bolarinwa, commended President Muhammadu Buhari for the laudable infrastructural projects so far executed and others that are still ongoing in various parts of the country, noting that the VP’s visit has rekindled hope in their collective zeal to take back Kwara state for the APC. 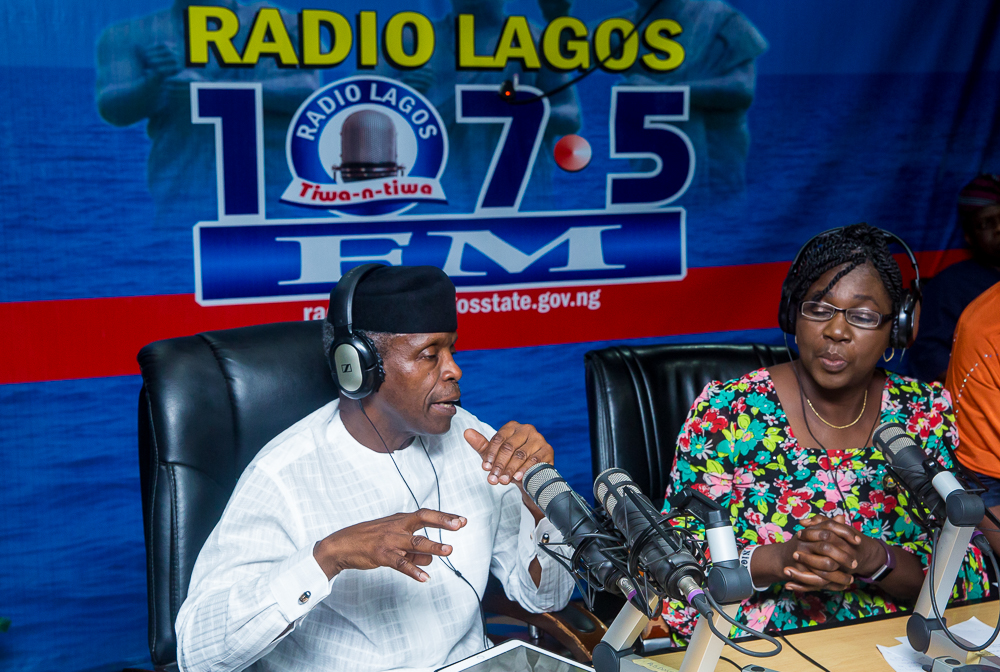