Part Two of the Transcript of a Media Interview Granted by the Vice President to a Group of Journalists & Social Media Practitioners in Lagos State on March 2, 2018

*On Dapchi & other security hotspots: We Are Working On Ensuring Effective Security

Vice President: If you will recall about a few months ago, I think it was in January, we had an education retreat; what needs to be done again is to unfold a whole direction in education. We came in with a manifesto on education, we had a few points that we were looking at and we also had some time to look at it. But many of us raised the issue that you don’t just pick the whole education; what about engineering because what we are seeing is such a dramatic change, not just in method of instruction in the requirement, job requirement, employment requirement, in technology and all of that, and that’s exactly what we are trying to do.

For example, we cannot have primary education the way it is, we’ve got to teach young people, we’ve got to introduce technology; you’ve got to have collaboration in education. We discovered, for instance, when we were doing the N-power – employment for young graduates, we discovered that it was also an opportunity to train the graduates. For the first time we were able to open a portal that has educational materials for graduates to just go in there. We also have devices for them to use.

But one important advantage of what we are doing is that all of a sudden, you can now train tens of thousands of people without sitting them in one place. So technology is going to play a role. We are in a very interesting place in terms of education today because you can leverage a great deal on technology. You can leverage a great deal on what is happening in other parts of the world. And we are trying to harness all of those resources and try to do something that will make a difference in our country. Here we are, in another 10 years we will be moving closer and closer to 2050 when we are going to be the 3rd largest population in the world. And there is almost a 70% youth population. We are not going to provide them with the number of classrooms that will be required, so we’ve got to really leverage on technology. We’ve got to leverage on verified trend that we see here and there.

Vice President: We have a democracy that has, as you know, three arms. The two relevant arms for budget are the executive and legislature. If you recall when I was Acting President, I signed the 2017 budget and, at that time, I made the announcement with the full consensus of the National Assembly that, from 2018, we are going to have a budget that is going to apply in January and end in December the normal financial year. We agreed that we will submit our proposal in good time, and we did that first week of November. The President did so. We fulfilled that part of the agreement. The budget is with the National Assembly. There is very little we can do to control that. That’s the system that we have.

Q: Seeming rift between the Executive arm of Government and the Legislature.

Vice President: Well, I’m not so sure that the tensions are unknown. The democratic system anywhere as, for example, in the US where we borrow our bicameral legislature from, you find that despite the fact that the Republican Party controls major part of parliament, it still doesn’t mean that bills are necessary going to go through.

So one must assume that the responsibility of the National Assembly is to scrutinize what the executive is doing and not just to be a rubber stamp. But I also agree with you entirely that it’s important for us, for the sake of our country, our economy and for the sake of many young people who are relying on us to deliver. We ensured that we released our budget on time. I want to believe that the executive has done its part and we wait on the National Assembly.

Q: About N9 Trillion debt said to have been inherited by this administration now reportedly about N30 T. How come?

Every government or most governments anywhere probably look for some points to borrow, but the important thing is what are you borrowing for? And that’s why we building the Lagos-Kano rail, doing the Lagos-Calabar rail, the second Niger Bridge and the Mambilla hydro project that has been abandoned for almost 40 years.

I think the most important thing is to ask that when there was a N9 trillion debt, where is the infrastructure to account for that? I think that is the most important question to ask. It’s not whether you borrow, but what you spend that money on. I think we should be able to prove that the earning is 60% less than the earning in the past five six years. So we are spending far more on the right thing and we are able to ensure that we build a future that young people can truly look forward to.

Q: What about the 50% revenue reportedly being spent on settling debts?

Vice President: No, we are not spending 50% of our revenue servicing debt. Let me explain that, we have a deficit somehow in the region of about N2.6 trillion now, a lot of our revenue has to be spent on capital and recurrent, and recurrent is 70% of revenue. But for the first time we are spending 30% on capital. Before now when oil was a $115 a barrel, we were spending 11% or 15% on capital, and capital is the most important expenditure because that is where you do the infrastructure in order to be able to build the economy. So the reality is what we are spending is to provide the infrastructure that will last.

Q: Abduction of 110 Dapchi girls in Yobe and the killings in states like Benue and Zamfara. Why didn’t the President or you visit these places?

The more important thing, and our focus has been, is first of all ensuring security in these places.

We have to address the security question in a much more robust way; that the police are able to do these effectively. We have deployed the military to Kaduna, two battalions to Kaduna. In Benue and Taraba axis, we have the 93 battalion, we have 72 Special Forces. We have full concentration in Taraba and all of that, and by the way, the military is fighting in most of the North East. So there is a situation where the military is overstretched. So I think the most important thing is first of all to ensure they actually address the security of the people.

Q: Nigerians definitely appreciate all you are doing. But they want to see their leaders come to them to grieve with them in the face of national human tragedy…

Previous Post Transcript of a Media Interview Granted by the Vice President to a Group of Journalists & Social Media Practitioners in Lagos State on March 2, 2018 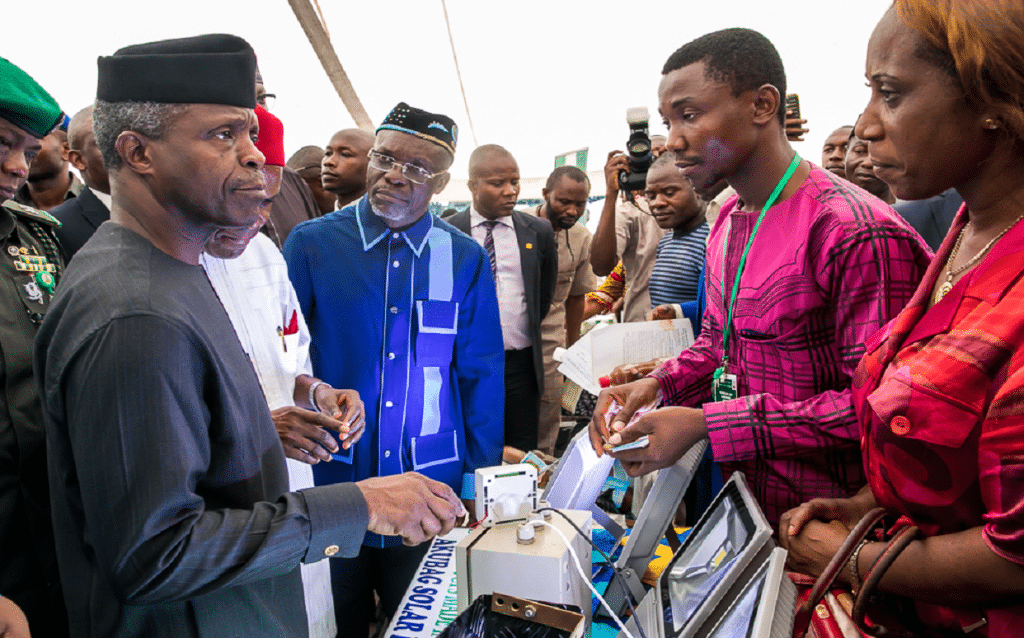